Answer: b
Explanation: Yield point phenomena is observed in low carbon steel or in the system where the alloy solute content is low. 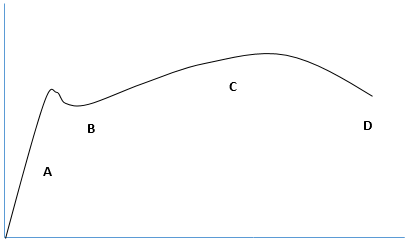 Answer: b
Explanation: The yield point phenomena are observed after the proportional limit is crossed, and material is the plastic region.

Answer: a
Explanation: The yield point phenomena is caused by the interstitial type alloying element so that they can diffuse and pin down the dislocation. So only carbon sits in interstitial site, rest all sit in the substitutional site or form compound.

Answer: a
Explanation: The strain aging is delayed hardening of metal. It increases the required stress to deform the material but decrease the elongation of the material.

6. The reappearance of yield point in strain aging is due to the diffusion of carbon and nitrogen to the dislocation atmosphere.
a) True
b) False
View Answer

6. The nitrogen plays a higher role in strain aging than carbon in case of iron.
a) True
b) False
View Answer

Answer: a
Explanation: Because the nitrogen has a higher solubility and higher diffusion coefficient. So the movement of nitrogen is much higher than carbon in iron lattice.

7. The stretcher strain marks are generally observed in which of the following metal working process?
a) Forging
b) Casting
c) Deep drawing
d) Rolling
View Answer

Answer: c
Explanation: The stretcher strain marks associated with yield point phenomena are generally observed in deep drawing. This is because of localized heterogeneous deformation of metal in deep drawing.

8. Aluminum, vanadium, titanium are generally added in steel to eliminate the yield point because they ___________
a) occupy the place of carbon in lattice
b) increase the required value of stress to cause yield point
c) they are strong carbide former to catch the carbon
d) they act as a deoxidant
View Answer

Answer: c
Explanation: The given metals are strong carbide former, so they form a compound with carbon. This limit the diffusivity of free carbon in the lattice and eliminate the yield point phenomena.

Answer: c
Explanation: The skin pass rolling is the method in which the material is given slight deformation to produce the sufficient number of dislocation and material crosses the point A. So during deep drawing, the yield point is never encountered. 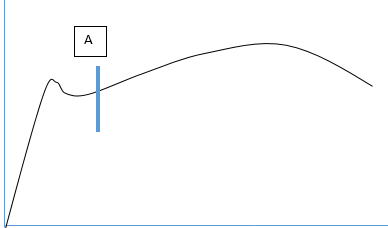 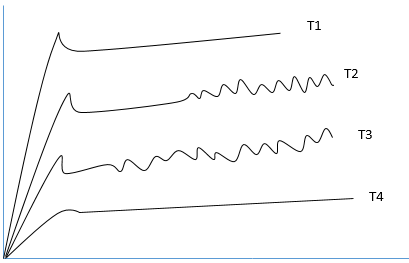 11. The dynamic strain aging is not associated with _______
a) Diffusion of carbon
b) Serration in the stress-strain curve
c) Portevin-LeChatelier effect
d) Dislocation multiplication
View Answer

Answer: d
Explanation: In simple terms, dynamic strain aging increases the required stress to cause the deformation of the material. The diffusion of carbon which causes serration in the curve, is termed as Portevin-LeChatelier effect. But the dislocation multiplication is not associated with dynamic strain aging.