Answer: a
Explanation: The heat equation was first put forth by Jean-Baptiste Joseph Fourier (21 March 1768 – 16 May 1830) in 1822. He was a French mathematician and physicist born in Auxerre. It was developed to describe heat flow.

2. Which of the following is not a field in which heat equation is used?
a) Probability theory
b) Histology
c) Financial Mathematics
d) Quantum Mechanics
View Answer

Answer: b
Explanation: The heat equation is used is several fields, some of which include,

Answer: c
Explanation: Consider a rectangular plate (thermally conductive material), with dimensions a × b. The plate is heated and then insulated.
We let u (x, y, t) = temperature of plate at position (x, y) and time t.
For a fixed t, the height of the surface z = u (x, y, t) gives the temperature of the plate at time t and position (x, y).
Under ideal assumptions (e.g. uniform density, uniform specific heat, perfect insulation, no internal heat sources etc.) one can show that u satisfies the two-dimensional heat equation,
ut = c2 ∇2 u = c2 (uxx + uyy) for 0 < x < a, 0 < y < b.

4. In mathematics, an initial condition (also called a seed value), is a value of an evolving variable at some point in time designated as the initial time (t=0).
a) False
b) True
View Answer

Answer: b
Explanation: Another definition of initial condition may be stated as, ‘any of a set of starting-point values belonging to or imposed upon the variables in an equation that has one or more arbitrary constants’

Answer: c
Explanation: The heat equation is also known as the diffusion equation and it describes a time-varying evolution of a function u(x, t) given its initial distribution u(x, 0).

6. Heat Equation is an example of elliptical partial differential equation.
a) True
b) False
View Answer

Answer: b
Explanation: Jean-Baptiste Joseph Fourier (21 March 1768 – 16 May 1830) was a French mathematician and physicist born in Auxerre who was the first person to develop heat equation. The heat equation is the prototypical example of a parabolic partial differential equation.

Answer: d
Explanation: The Bisection method, also known as binary chopping or half-interval method, is a starting method which is used, where applicable, for few iterations, to obtain a good initial value.

Answer: c
Explanation: For a second order partial differential equation to be hyperbolic, the equation should satisfy the condition, b2-ac>0.

To practice all areas of Fourier Analysis and Partial Differential Equations, here is complete set of 1000+ Multiple Choice Questions and Answers. 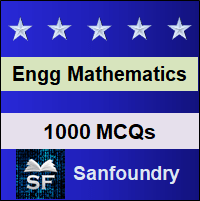