2. Can we estimate thrust loading based on Wing loading?
a) Yes
b) No
c) Both are same
d) Are not related to each other
View Answer

Answer: a
Explanation: Thrust loading is nothing but a ratio. It is the ratio of aircraft thrust to the weight of the aircraft. Higher thrust loading means higher thrust for given weight. This will improve maximum speed of an aircraft.
Subscribe Now: Aircraft Design Newsletter | Important Subjects Newsletters

4. Thrust to weight ratio of all the aircrafts is same.
a) True
b) False
View Answer

Answer: a
Explanation: Different type of aircrafts will have different requirements. Weight of different aircraft will be based on mission requirements. Thrust produced by engine will be different for all aircraft. Hence, thrust loading is not same for all the aircraft.

5. Thrust loading during flight does not remain constant as _____
a) fuel burns with each mission phase
b) fuel is not burned at all
c) will not change
d) lofting is changed
View Answer

Answer: a
Explanation: Thrust loading is generally measured based on take-off conditions. At each phase of mission profile weight will vary. Fuel burns throughout the flight which varies aircraft weight and which changes thrust loading as well.
Get Free Certificate of Merit in Aircraft Design Now!

6. Power loading of prop driven aircraft is ______
a) greater or equal to one
b) same as lift of propeller
c) always be zero
d) equal to drag always
View Answer

Answer: a
Explanation: Power loading for propeller driven aircraft is an important parameter representing the relation between power and weight. Power loading will always be greater than one and in much idle case it will be one. It cannot be zero. Lift and drag are forces.

Answer: a
Explanation: Power loading will be defined as the ratio of weight of the aircraft to the power; typically horsepower produced by prop engine. It will impact on acceleration, climb, maximum speed etc. In general, it varies from 10-20.
advertisement

Answer: c
Explanation: Power loading of prop aircraft is the ratio of weight of aircraft to the power produced by engine. Hence, [R] is false. Aerobatic aircrafts will require more power to perform different maneuvers. Hence, typical value of power loading will be around 4-7. Hence, [A] is also false.

Answer: a
Explanation: Power is defined as thrust into velocity. Propeller will be operating with some finite value of propeller efficiency ƞ. 550 we multiply as to make units similar both the side.
In general, for prop aircraft thrust loading and power loading is given as,
T/W = (550*η / V)*(hp/W)
advertisement

Answer: a
Explanation: When designer speaks for a thrust loading it generally refers to the value which has been calculated for standard day conditions, static sea-level conditions, take-off performance etc. Different phases incorporate different values of thrust loading. Hence, a designer typically converts them to take-off conditions. 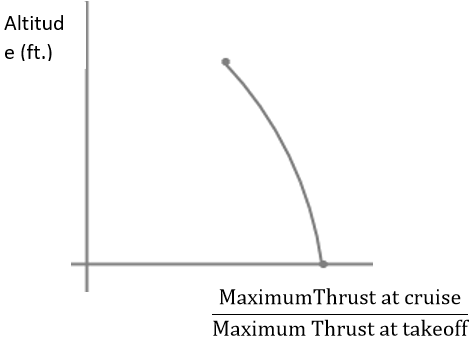 Answer: a
Explanation: Above diagram is showing thrust lapse at cruise. It is the variation of maximum thrust at cruise and take-off with altitude. Temperature lapse rate shows how temperature is changing with the altitude.