1. A good sketch should include _______________
a) overall aerodynamic concepts, location of components etc
b) only lifting area
c) only drag area
d) only volume
View Answer

Answer: a
Explanation: A good sketch is the one that highlights as much as detail as it can. It should include overall aerodynamic concepts, internal placements of components, landing gear location etc.
advertisement

2. What do you mean by the inboard profile’?
a) Most detailed drawing drawn to show greater details of internal components
b) First design of sketch
c) Inboard parts
d) Outboard parts
View Answer

Answer: a
Explanation: before a design can be finalized it needs to go through number of iterations. After this iterative process we make a design which has most detailed information. This detailed layout is called inboard profile. Typically, it is far more detailed than the initial layout.

Answer: a
Explanation: Lofting is defined as the process in which external geometry of an A/C is defined. It is nothing but the mathematical modelling the outer layer of the aircraft. Flutter is related to control surface. Drawing and drafting are related to each other.

4. Production lofting and simple lofting both are same phenomena.
a) True
b) False
View Answer

Answer: b
Explanation: Lofting is the method for defining external geometry of the aircraft. Production lofting is most detailed type of the lofting. It is used to provide exact and accurate mathematical model of the body.

Answer: b
Explanation: Now, in modern days we generally do not use spline lofting due to some disadvantages. Spline lofting requires more trial and error in order to achieve the smoothness as per requirement. Spline lofting is done by connecting different points via spline line.
advertisement 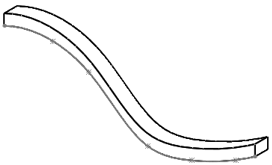 Answer: a
Explanation: Typical layout is shown by using spline lofting. In spline lofting we use spline line which can be seen in figure. A spline line is used to connect the number of known points in order to have required amount of smoothness as shown in above diagram.

Answer: a
Explanation: Conic lofting is done by using conic curves. A conic has number of different curves in family such as circle, ellipse etc. We can generate all such shapes via conic lofting. Hence, it is one of the advantages of it that it has availability of diverse curves.

Answer: a
Explanation: A conic is a 2nd degree curve. Conic in simple mathematical language is defined by using AX2 + BY2 + CXY + DX + EY + F = 0. Constants are based on our requirements. WE can produce different cross-section shape such as circle, parabola etc. by using conic.
advertisement

10. What will be the resulting curve if following cone is cut through plane as shown? 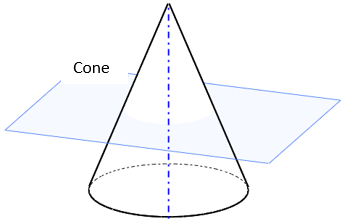 Answer: a
Explanation: Conic shape is dependent on the way we cut the cone. As shown in the figure, if conic is cut through a plane which is perpendicular to the axis of the cone then, the resultant shape will be a circle. Similarly, if plane is slanted then it will produce an ellipse.

Answer: a
Explanation: Conic lofting method is a step by step method to generate conic of desired cross-section. In general, first step of any conic development is to fixe two end points of the shape. And based on this endpoint we will fix the tangent point as per our requirement. 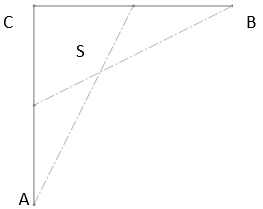 Answer: a
Explanation: A typical intermediate step of conic lofting is shown in the figure. Here, ‘A’ and ‘B’ points are selected as per requirements and called end points. C is the tangent point and S is known as the shoulder point for given conic lofting development.

13. Following diagram is showing an intermediate step of the conic lofting technique. What will be the value of angle marked by’?’? 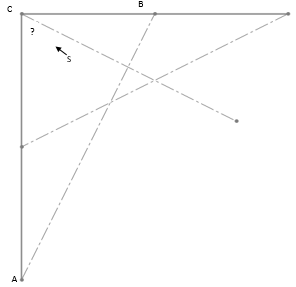 Answer: a
Explanation: After the selection of end points (A and B) and their tangent point C next step is to find point-S. When it is done the next step is to draw a line from a tangent point that can be at any arbitrary angle. This line could be at 20°, 50°, 60° or any arbitrary value as we desired. Once, this step is completed then, we can go further to find the next point of conic curve.
advertisement