1. Positioning of the propeller should be such that _____________
a) blade will not strike anyone if they fly off
b) blade should fly off during flight
c) it is always near to cabin
d) the blades will strike the engine
View Answer

Answer: a
Explanation: As a crashworthiness consideration, positioning of the propeller should be such that the blades will not strike anyone in case of failure or emergency. Hence, as a designer it is our primary role to ensure not only performer but also safety of passengers as well.

2. Typically, in a passenger aircraft fuel is not located in the fuselage.
a) True
b) False
View Answer

Answer: a
Explanation: Typically, it is advised to not locate fuel tanks under the fuselage. Fuel tanks can increase flames spreading tremendously. Hence, to avoid such a scenario it should not be located below or in the fuselage. 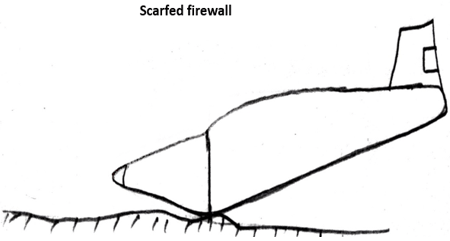 Answer: a
Explanation: The above diagram is representing the effect of scarfed firewall. As shown it reduces the scooping. RCS is measurement of radar detection. Wetted area will affect aerodynamics of design.
Note: Join free Sanfoundry classes at Telegram or Youtube
advertisement
advertisement

4. What do you mean by crashworthiness?
a) Capability of structure to protect against impacts and crash loads
b) Capability of an aircraft to stay in cruise
c) Vulnerability to radar detection
d) Special aerodynamic lift improvement
View Answer

Answer: a
Explanation: Capability of structure to protect against impacts and crash loads can be termed as crashworthiness design. Whether the aircraft will stay in cruise or not this will be decided by operating environment. 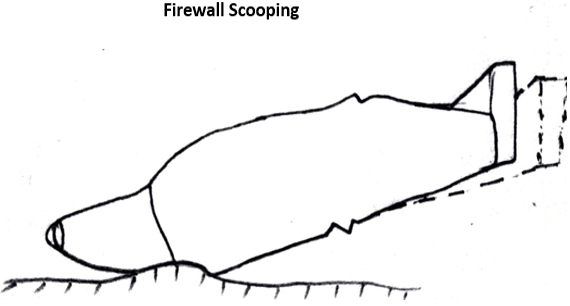 Answer: a
Explanation: Above diagram is showing scooping effect. As shown in the figure, because of the scooping crash loads has increased. Wing loading will be used to size the aircraft. Based on mission and type of aircraft we can size our design by using wing loading concepts.
Take Aircraft Design Tests Now!

6. For large passenger aircraft, floor should be supported by braces at lower part of the fuselage.
a) True
b) False
View Answer

Answer: b
Explanation: Typically, it is not advised to use such arrangements. If this type of arrangement is used then, it may affect the safety of aircraft at the time of the crash. Hence, it should be avoided. Answer: a
Explanation: Effect of placing strut below passenger cabin is shown in the above diagram. As shown in figure, it strut is placed as shown then, during crash it will increase damage to passenger. This lowers safety of passengers and hence, should be avoided to reduce such effects.
advertisement

Answer: a
Explanation: Gears should be placed such that they would not rip open fuel tank at the time of crash. Location should be selected by considering crashworthiness as well. If location is not adequate then, it will damage to crashworthiness properties of our design.