This set of Aircraft Design Interview Questions and Answers for freshers focuses on “Wing Geometry-2”.

1. For high aspect ratio strength of the wing tip vortex is low.
a) True
b) False
View Answer

3. Which of the following is correct in accordance to diagram? 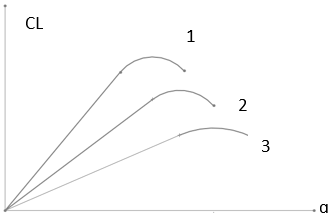 Answer: a
Explanation: If wing is at some finite angle from fuselage reference line then it is called wing is sweep by that much degree. Main function of sweep is to increase critical mach number. Lofting is skin modelling and drafting is drawing phenomena.
advertisement

Answer: a
Explanation: Canard pusher aircrafts are heavier at rearward part. At tail weight is more. By sweeping the wing we can alter the location of aerodynamic center for balance.

Answer: a
Explanation: Taper ratio is the ratio of tip chord of wing to root chord of the wing. Aspect ratio is square of span divided by area. Sweep is angle between wing and fuselage reference line.
advertisement

11. What is the function of wing twist?
a) To improve stall characteristics at tip
b) To reduce lift by tail
c) To provide lofting
d) To increase engine thrust
View Answer

Answer: a
Explanation: Wing twist is used to delay the stall at tip typically. Wing twist can be used to rearrange the lift distribution of the wing. Lofting is skin modelling.

Answer: a
Explanation: Dihedral is upward deflection of wing. It is used to provide roll stability. If excessive dihedral is provided then, it will lead to dutch roll; continuous side to side motion involving yaw and roll.

To practice all areas of Aircraft Design for Interviews, here is complete set of 1000+ Multiple Choice Questions and Answers.