1. Which of the following is an example of an aircraft subsystem?
a) Pneumatic
b) Gear retraction
c) Landing gear
d) High lift device
View Answer

Answer: a
Explanation: Pneumatic system is an example of aircraft subsystem. Gear retraction refers to the method and configuration through which landing gears are retracted in the aircraft. Landing gear are used to withstand impact during landing.

2. Which of the following is considered to be correct subsystem to deflect control surface?
a) Hydraulic system
b) Pneumatic subsystem
c) Fuel system
d) Deice system
View Answer

Answer: a
Explanation: A typical pneumatic system is used for operation requiring less amount of power or pressure. It is used to provide compressed air for pressurization of the aircraft. More pressure output can be achieved by using hydraulic system.
Note: Join free Sanfoundry classes at Telegram or Youtube
advertisement
advertisement

Answer: a
Explanation: A typical hydraulic system will affect conceptual design based on space requirements for pumps typically. Control surface are located at the wing or at tail section. Lift required at tail will be affected by which type of airfoil is used.
Take Aircraft Design Tests Now!

6. A typical electrical system may include _________
a) generators, transformers, cables, etc
b) only generator
c) drag polar system
d) only transformers
View Answer

Answer: a
Explanation: A typical electrical system consists of generators, transformers, cables etc. It is used to provide electrical energy. Drag polar is graphical representation of drag. It is used to show relationship between drag and lift. 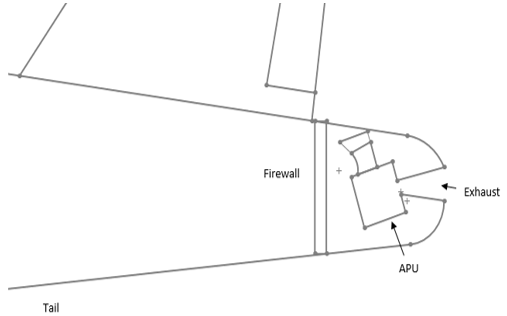 8. Let’s consider we need to design avionics system for general aviation aircraft. If empty weight of aircraft is 100 unit then what will be the approximate range of required avionics weight.
a) 1 unit to 3 unit
b) 0.3 to 0.5 units
c) 0.58 units
d) 4 to 5 units
View Answer

10. APU exhaust should be directed upward.
a) True
b) False
View Answer

Answer: a
Explanation: Typically, APU is nothing but another jet engine that requires its own inlet and outlet. An APU is used to provide ground power. Exhaust from the APU should be directed upward is true. This is done in order to reduce the amount of noise produced by inlet and exhaust.