Answer: a
Explanation: Weapon carriage is one of the important parameters in military aircraft. Traditional and typical weapons are guns, bombs, missiles etc. High lift device is used to generate a higher lift. Vortex generator will generate vortex.

Answer: a
Explanation: Substantial portions of the total aircraft weight are weapons. Typically, weapons are placed near the CG of an aircraft. This would help to make aircraft less influenced by weapons for example, aircraft can perform pitch up when weapon is released and hence, by locating near CG, we can reduce such effects.

3. Which of the following is correct?
a) Missile can be launched in two ways typically
b) Missile are always free fall
c) Bombs are always guided
d) All Missile and bombs adopt similar launching mechanism
View Answer

Answer: a
Explanation: Typically a missile can be launched in two different ways either rail guided or release mechanism. Missiles are not always free fall. They could be rail guided as well. Typically bombs are not guided however some guided bombs are in use as well.
Sanfoundry Certification Contest of the Month is Live. 100+ Subjects. Participate Now!
advertisement
advertisement 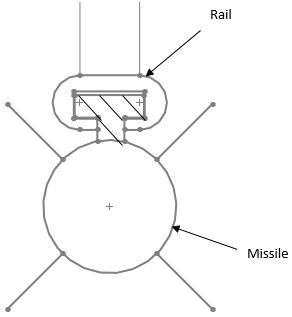 Answer: a
Explanation: Typically missile can be launched in two different ways. Above diagram is showing a typical rail launched mechanism. Rail launcher is typically mounted to the aircraft at either wingtip or a pylon. 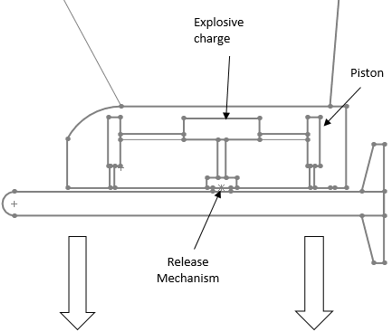 Answer: a
Explanation: In the above diagram a typical ejection launch mechanism for missile is shown. Missile is connected through some hooks which can quickly release the Missile from aircraft. Generally this system is used for larger missiles.
Check this: Aerospace Engineering Books | Aerospace Engineering MCQs

6. Which of the following is a type of weapon carriage?
a) Conformal
b) Uni Conformal
c) Omni external
d) Tail dragger
View Answer

7. All the fighter aircrafts incorporate only external weapon carriage.
a) True
b) False
View Answer

Answer: a
Explanation: In a typical, external weapon carriage weapons are located outside of the aircraft. This arrangement experiences higher values of drag. However, it is most suitable for carrying different weapons.
advertisement

10. Determine the corrections or otherwise of the following Assertion [A] and Reason [R]:
Assertion [A]: Supersonic flight is very difficult with pylon mounted external weapon carriage.
Reason[R]: External weapon carriage will experience minimum drag at supersonic speeds.
a) Both [A] and [R] are true and [R] is the correct reason for [A]
b) Both [A] and [R] are true but [R] is not the correct reason for [A]
c) [A] is true but [R] is false
d) [A] is false but [R] is true
View Answer