2. Which of the following is not the type of fuel tank?
a) Flap
b) Integral
c) Bladder
d) Discrete
View Answer

Answer: a
Explanation: There are mainly 3 types of fuel tank: discrete, bladder and integral. Flap is not type of fuel tank. Flap is a high lift device. Flap is used to increase lift produced by wings during takeoff and landing. 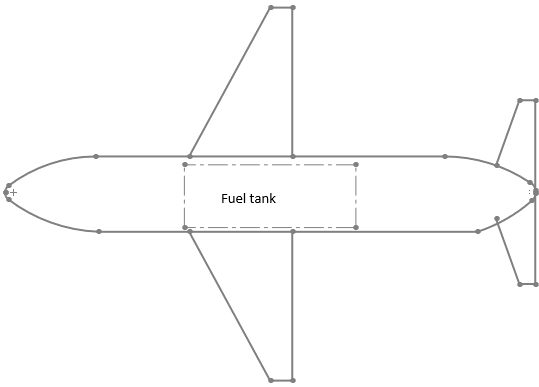 4. Integral tanks are ___________
a) cavities within the aircraft’s airframe itself
b) external tanks needs to be fabricated
c) external tanks required to put in the airframe
d) there is no such type of fuel tank
View Answer

5. What is the disadvantage of bladder fuel tank?
a) Loss of available fuel volume
b) Self sealing
c) No loss in fuel volume
d) Thrust loading
View Answer

Answer: a
Explanation: A typical bladder tank is formed by stuffing a shaped rubber bag into a cavity in the aircraft structure. However, the thick rubber bag results in the kids of available fuel volume. Self-sealing property is one of the advantages of the bladder tank. Thrust loading is the ratio of thrust to weight.
Take Aircraft Design Mock Tests - Chapterwise!
Start the Test Now: Chapter 1, 2, 3, 4, 5, 6, 7, 8, 9, 10

6. Which of the following is correct?
a) Bladder tanks can be manufactured self-sealing
b) Bladder is only available fuel tank to be used
c) Lift is same as weight always
d) Nozzle compresses exhaust flow
View Answer

Answer: b
Explanation: Total fuel CG should be located near to the aircraft CG. This will help to improve longitudinal stability and control. Fuel tanks can be placed at centre or at tip or at tail. Hence, Both [A] and [R] are true but [R] is not the correct reason for [A].
advertisement

8. Typically, main fuel tank is located near to the __________
a) inboard section of the wing
b) at cockpit
c) at passenger cabin
d) at tip of the wing
View Answer

Answer: a
Explanation: Typically, main fuel tank is located near to the inboard section of the wing. At tip, tip tanks are placed. Due to safety parameters, one soul avoid placing fuel tanks at the passenger cabin or at the cockpit.

9. Fuel tanks should not be located at wingtip.
a) True
b) False
View Answer

Answer: a
Explanation: If possible, designer should not place fuel tanks at the wingtip. By locating fuel tanks at wingtip, designer increases the possibility of hazard due to lighting strike. Also for roll stability we should locate fuel tanks near to roll axis.
advertisement

10. Bladder tanks are one of the widely used type of fuel tank.
a) True
b) False
View Answer