This set of Aircraft Design Interview Questions and Answers for Experienced people focuses on “Configuration Layout – Wing/Tail Layout and Loft-2”.

1. As a designer, our task is to design wing layout such that the location of MAC from root chord or centre line is at 8ft. Find the appropriate value of the wingspan if wing is rectangular.
a) 32ft
b) 50ft
c) 28m
d) 32m
View Answer

2. A fighter jet is flying with wing span of 90ft. If mean aerodynamic chord MAC is at 30ft from tip chord then, to design such wing which type of planform should I use?
a) Delta
b) Rectangular
c) Square
d) Triangle
View Answer

3. An unstable A/C configuration is a typical wing-aft tail body. IF MAC is 4m then, what would be the approximated location of the CG?
a) 2m
b) 5m
c) 6m
d) 7m
View Answer 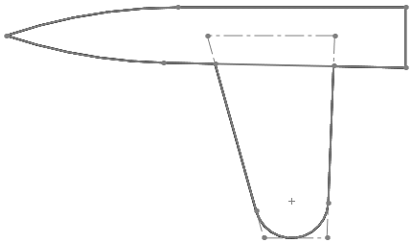 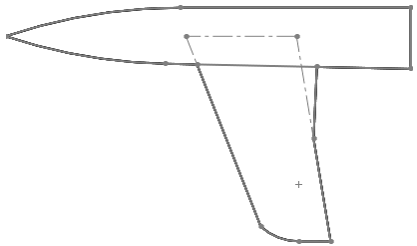 Answer: a
Explanation: Above figure is often termed as trailing edge kick. A straightened out trailing edge will increase the flap chord. It also reduces induced drag. Rounded tip will permit air to flow around tip easily.
advertisement

Answer: a
Explanation: Wing fillets are arcs as shown in figure. Wing fillets are used to improve smoothness of the root of the airfoil as shown. This will result in improvement of aerodynamic efficiency. A typical fillet is a circular arc.
advertisement

Answer: a
Explanation: A flat wrap surface has same tangent angles for different conic curves. When linear interpolation method is used, it does not always provide constant cross-sections or c/s with same tangent angles. Hence, it may or may not produce flat wrap. We can generate flat wrap by providing some constraints as well.

Answer: d
Explanation: In order to provide flat wrapping to wing, it is required to interpolate between airfoil coordinates with same tangent angle or slope. Chordwise lines are affected by wing twist. So, it will not generate flat structure from curves with different tangent angles. Hence, a spanwise line is used for flat wrap interpolation.
advertisement

11. Fillet radius is typically more at rear of the aircraft.
a) True
b) False
View Answer

Answer: a
Explanation: Fillet arcs can be of constant radius or can be of varying radius. Typically, at rear of an a/c fillet arc radius is more. This will result in reduction of the flow separation.

Answer: b
Explanation: Wing planform is shape generate when viewed from top. Elliptic wings are more efficient in terms of lifting properties. However to manufacture it is also difficult. Hence, wing planform is not always elliptic rather it will be selected according to mission requirements.

To practice all areas of Aircraft Design for Interviews, here is complete set of 1000+ Multiple Choice Questions and Answers.