Answer: a
Explanation: Directional stability of the aircraft is defined as the stability about the yawing axis. In typical aircraft yaw and rolling both will be produced by deflecting the rudder. Stability about rolling moment is called lateral stability.

Answer: a
Explanation: Stability about the rolling is termed as lateral stability. Lateral and directional stability are closely coupled. When we deflect only aileron it will generate rolling as well as it will also cause the aircraft to yaw. Longitudinal stability is Stability about pitching moment. Elevator is used for such purposes.
Sanfoundry Certification Contest of the Month is Live. 100+ Subjects. Participate Now!
advertisement
advertisement

Answer: a
Explanation: Given, aircraft is in cruise, lift = 100N.
At cruise condition, net rolling moment is zero. As at cruise all the forces and moments are in equilibrium or in balanced.

Answer: a
Explanation: An aircraft is said to be in directional stability if the yawing moment curve slope is positive. Negative pitching moment coefficient curve slope is minimum criteria for longitudinal static stability. Positive value of zero lift pitching moment coefficient will be used to design an aircraft to trim at positive AOA.
Check this: Aeronautical Engineering MCQs | Aerospace Engineering MCQs 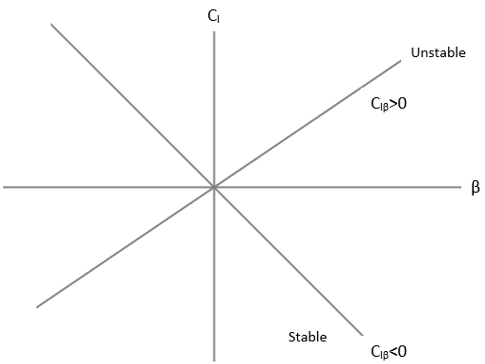 Answer: a
Explanation: Above diagram is illustrating the concept of roll stability. Typical lateral stability criteria can be observed in the diagram. Longitudinal stability is represented by using pitching moment curve. Lift curve will be used to provide relationship between lift and angle of attack. Drag polar will correlate drag and lift.
advertisement

9. Aircraft can suffer from adverse yaw during rolling.
a) True
b) False
View Answer

Answer: a
Explanation: Yes, it is true that aircraft can suffer from the adverse yaw phenomenon due to rolling motion. When an aircraft is banked to execute turning operation, the aileron may produce a yawing motion that opposes the turn. This is called adverse yaw.
advertisement

To practice all objective questions on Aircraft Design, here is complete set of 1000+ Multiple Choice Questions and Answers.