1. Why do we provide upsweep to the lower surface at aft fuselage?
a) To reduce drag
b) To increase drag
c) To increase lift
d) To maximize drag
View Answer

Answer: a
Explanation: Fuselage is primary drag generating component of aircraft. A lower surface upsweep is provided to reduce drag penalty for typical aircraft. This upsweep will induce vortex flow pattern at the lower surface which can reduce the drag. However, for high speed aircraft it should be as low as possible.

2. What is the base area of the fuselage?
a) Any unfair rearward facing blunt surface
b) Forward facing surface
c) Wing area
d) Fuselage cabin area only
View Answer

Answer: a
Explanation: Base area is nothing but the rearward area of the fuselage. It is any unfair rearward facing blunt surface. Wing area is the product of span and chord for rectangular planform. Fuselage cabin will be located at front side of the fuselage.

Answer: a
Explanation: While designing an aircraft, designer should not forget about aerodynamic interaction of different components. If a canard is required then the interaction of canard with other components should be considered during layout. If canard wake enters into the engine it can stall the blades and as a result, engine performance will be reduced as well. 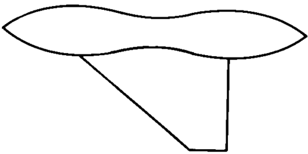 Answer: a
Explanation: Above diagram is showing typical low wave drag design of an aircraft. It is called coke-bottling. It is used to improve the wave drag properties by altering the volume distribution. It can be used to reduce drag up to 50%.
Get Free Certificate of Merit in Aircraft Design Now!

Answer: a
Explanation: R. whitcomb had developed a method to reduce the supersonic drag. The method is known as area ruling or area rule. In this method overall volume distribution of components are altered in such way that the resultant body should provide less drag.

7. Interaction of components will not affect aerodynamic design of fuselage.
a) True
b) False
View Answer

Answer: a
Explanation: Vortex generator is small body placed on surface to reattach the separated flow. A flow flows around the vortex generator, it curls the flow. And as a result of which flow is being forced to swirl and to flow reattaches to the surface if it has separated.

9. Area rule can be used for high speed aircraft only.
a) True
b) False
View Answer

Answer: a
Explanation: Area rule is primarily developed to reduce the supersonic wave drag effects. However, it is not limited to high speed aircrafts only. We can also apply same rule to design the civil and commercial aircrafts as well.
advertisement

To practice all areas of Aircraft Design for Quizzes, here is complete set of 1000+ Multiple Choice Questions and Answers.