Answer: a
Explanation: RADAR stands for ‘radio detection and ranging’. It is used to detect the aircraft. Radar can be monostatic radar or bistatic based on location of transmitter and receiver. Radar is one of the primary sensors in modern aircrafts.

2. Radar detection is one of the crucial consideration for military aircraft.
a) True
b) False
View Answer

Answer: a
Explanation: Radar detection is crucial and vital consideration for a military aircraft. If military aircraft is easily detected by enemy radar then, it can lead to casualties and chaos. If an enemy is not able to detect our military aircraft then, they cannot dealt much damage and our survivability will increase at such time. There are plenty of reasons among which some has mentioned above.

Answer: a
Explanation: Given, Distance d =4m.
Since, no other parameters have mentioned we will directly use the relation between strength and the distance to find required relation.
Typically, radar strength is proportional to (1/distance4) = (1/44).

6. RCS is the measure of ___________
a) the amount of EM energy is being returned by an object
b) how much weight is required
c) lift generated
d) radio cruise and stall properties
View Answer

Answer: a
Explanation: RCS will directly affect radar detectability of the aircraft. It is the measure of how much EM energy is being returned by an object. If RCS is more then, the object will return more amount of the EM energy and vice-versa.

Answer: a
Explanation: RCS is based on the look angle. By altering look angle we can alter the rcs of an object. Tail moment arm will affect the stability not the rcs in general. RCS is also reduced by using stealth technology.
advertisement

Answer: a
Explanation: RCS is a measure of how much easier our object van be detected. Higher rcs indicate that the object is more detectable to the radar and hence, detectability will be more. If rcs are low then, it will be less detectable.

9. Which of the following will not affect the radar detectability of an aircraft?
a) Drag magnitude
b) Look angle
c) Flat surface
d) Stealth properties
View Answer

Answer: a
Explanation: Radar detectability is directly affected by how much EM energy is being returned by an object. It is also affected by RCS or radar cross section. RCS depends upon look angle, flat surface, stealth technology etc. Drag magnitude will not affect radar detection.
advertisement 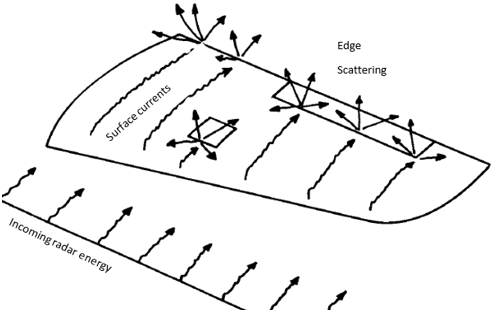 Answer: a
Explanation: Above figure is illustrating the concept of surface current scattering. As shown in the figure, some radar energy is incoming to the surface. As radar energy passes through the surface some edge scattering can be observed as shown by the diagram. This scattering effect can affect the radar detection.

11. RCS of flat surface can be reduced by _____
a) providing some slope to flat surface
b) increasing flat side length
c) using twice length of the flat side
d) provide more rcs to flat side
View Answer

Answer: a
Explanation: Flat surfaces offer highest rcs possible. Now, to reduce it we can provide some slope to flat side of the surface. This will reduce the amount of EMW being returned by the flat side. If we increase the flat side length then, it will not reduce rcs of the flat surface.

12. RCS can be reduce by using RAM only.
a) True
b) False
View Answer

Answer: b
Explanation: RCS of an object can be reduced through number of ways. RAM is one of the available option to reduce rcs of an object. For example, we can reduce rcs by using stealth technology, by using sloped surfaced instead of flat etc. Hence, the given statement that rcs can only be reduced by Ram is not correct.

13. As a designer, we want to improve radar detectability of our aircraft. Where should we locate our warheads to achieve this goal?
a) Inside fuselage
b) Outside fuselage
c) Below wing
d) At wingtip
View Answer

Answer: a
Explanation: Inside fuselage will eliminate rcs of warheads as they are no longer in the range of radar signals. Locating warheads on wingtips, outside fuselage or below wings will provide some surface area through which signal can be returned. Hence, it will not improve detectability as an inside fuselage position.