1. During rolling process, the thickness of workpiece squeezed is called what?
a) Shaft
b) Bore
c) Draft
d) Core
View Answer

Answer: c
Explanation: During rolling process, the workpiece gets squeezed, causing the thickness of the workpiece to reduce. This reduced thickness is called a draft.
advertisement

2. With an increase in starting thickness, how would it affect the reduction?
a) Increases
b) Decreases
c) Won’t change
d) Not related
View Answer

Answer: b
Explanation: When the starting thickness of the workpiece gets increased, the reduction of correspondingly gets decreased.

4. Which of the following has the most magnitude?
a) Slip velocity
b) Surface velocity
c) Entering velocity
d) Exiting velocity
View Answer

6. When a metal is entering, how are the width and the length of the workpiece related to each other?
a) Direct relation
b) Inverse relation
c) Exponential relation
d) No relation
View Answer

7. Roll velocity is lesser than exiting velocity.
a) True
b) False
View Answer

Answer: a
Explanation: Exiting velocity is has the most magnitude when compared to the other velocities, and is higher than the roll velocity.

8. When a material is being rolled, the perpendicular force on the arc is called what?
a) Thickness force
b) Roll force
c) Angle force
d) Die force
View Answer

Answer: b
Explanation: There is a force perpendicular to the arc which is in contact when the rolls are pressurizing the material. This force is called a roll force.

9. How would the draft be affected, if the radius of the roller is decreased?
a) Increase
b) Decrease
c) Won’t change
d) Not related
View Answer

10. There is no slipping between roller and workpiece.
a) True
b) False
View Answer

Answer: a
Explanation: There is a certain amount of slipping that is observed, between the roller and the workpiece. The magnitude of slipping is measured by the term called Forward slip. 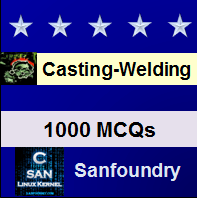