1. A copolymer of butadiene and acrylonitrile is known as __________
a) Nitrile rubber
b) Butyl rubber
c) Polysulphide rubber
d) Fluorine rubber
View Answer

Answer: a
Explanation: Nitrile rubber is a copolymer formed by a combination of butadiene and acrylonitrile. It has good tensile strength and exceptional adhesion. It is largely used in aircraft fuel tanks, printing rollers, and O-rings.
advertisement

Answer: d
Explanation: Styrene butadiene rubber is a low-cost synthetic rubber having tremendous resistance to aging. It has a poorer tensile strength which can be improved by vulcanizing, and elongation of 500-600%.

Answer: b
Explanation: Butyl rubber is a polymer made from a combination of isobutylene and 3% of isoprene. It possesses low strength and high elongation, with good chemical and dielectric properties. It is mainly used for liners and inner tubes.

4. What is the common name for polysulphide rubber?
a) Neoprene
b) Polyurethane
c) Thiokol
d) Hypalon
View Answer

Answer: c
Explanation: Thiokol is a rubber which holds admirable resistance to oil and solvents. It also has good electrical resistivity and superb resistance to ozone. It is mainly used in aircraft fuel tanks, gaskets et cetera.
Advertisement: Join Sanfoundry@Linkedin

5. Which of the following is not a method of fabrication of rubber?
a) Compression molding
b) Calendering
c) Buffing
d) Vacuum forming
View Answer

Answer: c
Explanation: Some of the basic forming and fabrication techniques for rubber include compression molding, calendering, injection and transfer molding, and extrusion among others. Tumbling, trimming, and buffing are techniques of finishing this fabricated rubber.

Answer: a
Explanation: Natural mica is available as muscovite and phlogopite among the commonly used forms. Muscovite, otherwise known as ruby mica, is generally odorless. It is often favored in electrical applications.
advertisement

9. Which of the following is not a form of mica?
a) Fully trimmed
b) Partially trimmed
c) Film
d) Wire
View Answer

To practice all areas of Engineering Materials and Metallurgy for tests, here is complete set of 1000+ Multiple Choice Questions and Answers. 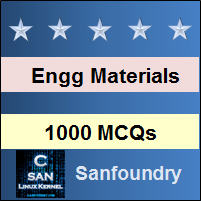