This set of Engineering Materials and Metallurgy Questions and Answers for Aptitude test focuses on “Pyrometry and the Types of Pyrometers”.

Answer: a
Explanation: The most widely preferred method of measurement and control of metallurgical temperature is the thermoelectric pyrometer. It can be used up to a temperature of 3000 F. It consists of a thermocouple, junction block, extension leads, and a recorder.

2. The total emf of the thermoelectric pyrometer is given as ___________
a) Peltier effect
b) Thomson effect
c) Seebeck effect
d) Joule’s method
View Answer

Answer: b
Explanation: The Peltier effect of thermoelectric pyrometer involves emf at the hot and cold junctions, whereas Thomson effect deals with emfs along each wire. The cold junction must be kept at a constant temperature of 0oC or 32 F.
Note: Join free Sanfoundry classes at Telegram or Youtube
advertisement
advertisement

Answer: d
Explanation: Thermoelectric pyrometer makes use of dissimilar materials for the metallic wires to develop an emf. Chromel-Alumel is a commonly used material containing chromel (nickel and chromium) and alumel (nickel, manganese, aluminum, silicon). It is useful at a temperature range of 1200-2200 F.

5. Constantan is an alloy containing _________
a) Nickel and aluminum
b) Silicon, manganese, and aluminum
c) Copper and nickel
d) Aluminum and manganese
View Answer

Answer: c
Explanation: Thermoelectric pyrometer makes use of dissimilar materials for the metallic wires to develop an emf. One such material is Iron-Constantan. Constantan is an alloy containing 54% copper and 46% nickel. It is useful at a temperature range of 300-1400 F.
Take Engineering Materials and Metallurgy Tests Now!

6. What is the advantage of copper-constantan over iron-constantan?
a) Low density
b) Low coefficient of expansion
c) Low-temperature measurement
d) Elevated temperature difference
View Answer

Answer: c
Explanation: Copper-constantan differs from iron-constantan due to the use of copper instead of iron, along with the possible addition of manganese and iron. This is useful for measuring low temperatures up to -420 F and a maximum limit of 600 F.

Answer: d
Explanation: 10% Rhodium-Platinum is a noble-metal thermocouple used for measuring very high temperatures. It can be used in a temperature range of 32-3200 F. These are used when radiation or optical pyrometers do not perform satisfactorily.
advertisement

Answer: a
Explanation: A recording pyrometer is used to obtain an entire record of the temperature. On the addition of an electric circuit, it may be used to control the flow of gas. Such a device is known as a controlling pyrometer.
advertisement

10. A radiation pyrometer is based on ___________
a) Planck’s law
b) Stefan-Boltzmann law
c) Rayleigh-Jeans law
d) Sakuma-Hattori equation
View Answer

Answer: b
Explanation: The principle of radiation pyrometer is based on a standard radiation body known as a blackbody. These pyrometers are calibrated to indicate blackbody or true temperature. The Stefan-Boltzmann law expresses the rate of radiation energy.

Answer: a
Explanation: The principle of radiation pyrometer is based on a standard radiation body known as a blackbody. By Stefan-Boltzmann law, W = KT4 expresses the rate of radiation energy as a proportional to the fourth power of absolute temperature. Here W is the rate of energy emitted and K is a constant of proportionality.

Answer: d
Explanation: The radiation pyrometer does not require direct contact with the hot body. Therefore, the upper limit for temperature is not limited by the ability to withstand high temperatures. The lower limit is 1000 F, whereas by using proper stops there is no upper limit temperature.

13. What can be done to increase the temperature range of optical pyrometers?
a) Better accuracy of telescope
b) Using electrical circuit for control box
c) Inclusion of absorbing screen
d) Using red filter
View Answer

14. What can be done to make the color comparison better for an optical pyrometer?
a) Better accuracy of telescope
b) Using electrical circuit for control box
c) Inclusion of absorbing screen
d) Using red filter
View Answer

Answer: d
Explanation: An optical pyrometer measures temperature by comparing brightness or the emitted light. To make this comparison easy, a red filter is used. This red filter limits the visible radiation only to the wavelength of red radiation.

To practice all areas of Engineering Materials and Metallurgy for Aptitude test, here is complete set of 1000+ Multiple Choice Questions and Answers. 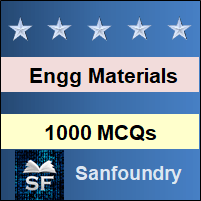