1. What is the main component of the tissues in our body?
a) Cells
b) Organs
c) Muscles
d) Cartilage
View Answer

Answer: a
Explanation: Tissues are made up of various specialized cells that are grouped together according to their function. Whereas organs consist of tissues as one of their main components along with stroma, muscles are a kind of tissue which consist of specialized cells which aid in our movement and cartilage is a type of flexible connective tissue which is found in certain regions of the respiratory tract as well as in the articulating surfaces of joints.

2. What was a loose belief on which the miasma theory was based on?
a) The diseases like cholera and chlamydia were caused by pollution
b) Microorganisms known as pathogens can lead to disease
c) Pneumonia is caused by Streptococcus pneumoniae
d) Vericella zoster is the virus that causes Chickenpox
View Answer

Answer: a
Explanation: The miasma theory is an obsolete medical theory which believed that few of the diseases like cholera were caused by pollution, a noxious form of “bad air”. The theory suggested that the cause of epidemics arose from miasma, emanating from rotting organic matter.

Answer: b
Explanation: The presence of foreign tissue after the transplant triggers something that is called an immune response, in which there are immune attacks (chronic rejection) on the donor’s tissue causing its degradation.

4. Tissue Engineering is a branch of Biotechnology which relies on the knowledge available in the other branches of Biotechnology like biochemistry, cell biology, immunology, and genetics.
a) True
b) False
View Answer

Answer: a
Explanation: Tissue Engineering is a field that fuels itself from the knowledge borrowed from other well-established fields like immunology, genetics, cell biology and biochemistry for the treatment of human disease.

Answer: b
Explanation: Currently approaches to tissue engineering can be stratified as substitutive, histoconductive and histioconductive. The histoconductive approach facilitates self-repair which may involve gene therapy.

6. Which of the following is the appropriate option? 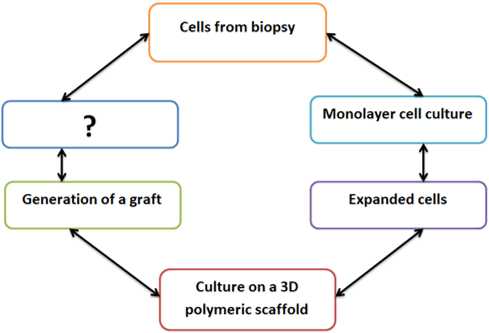 Answer: a
Explanation: The person afflicted with a particular disease usually has a certain number of cells affected in the process, so to generate healthy cells of the same kind the patient’s cells are taken and cultured and used for generation of a graft to avoid chronic rejections by the immune system.

7. Which of the following is the appropriate option? 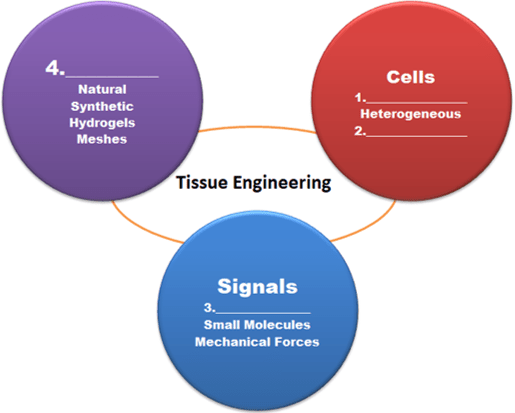 Answer: c
Explanation: The diagram depicts the triad of tissue engineering comprising of Cells, Signals, and Biomaterials. Therefore, the 4th blank is Biomaterials, and its types are natural, synthetic, hydrogels and meshes. The 1st and 2nd blanks are Autologous and Differentiated stem cells as they are types of cells. The 3rd is Growth Factors as it is a medium for inducing signals in various biological phenomena.

8. Allo-transplantation is a technique of transplantation of cells in which the cells are derived from a genetically identical donor.
a) True
b) False
View Answer

Answer: b
Explanation: Scaffolding is a very important component in tissue engineering, which incorporates the three important elements, cells, biomaterials and growth factors. Whereas seeding is the step following scaffolding in which the cells are cultured on a framework of the tissue. The cells to be seeded on the scaffold are isolated and cultured according to the type and need.

Answer: a
Explanation: Autologous cells are considered the favorite kind of cells in tissue engineering as they do not evoke an immune response when administered. They also eliminate the need for immunosuppressants. Heterologous cells are derived from a genetically non-identical donor might cause a possible immune response. Differentiated stem cells and fibroblast cells could be either autologous or heterologous based on the source they are derived from.

Answer: a
Explanation: Brain is an example of the organs that cannot be transplanted in today’s date, but heart, lungs, and pancreas can be transplanted provided a donor is available, with appropriate compatibility like the same blood group, similar age, etc.

12. If a person is going to receive stem cell transplantation, they need to go through chemotherapy and other radiation procedures as a part of the preparation for the transplantation.
a) True
b) False
View Answer

13. A bone marrow donor for bone marrow transplant is compulsorily supposed to be a relative.
a) True
b) False
View Answer

Answer: b
Explanation: No, the bone marrow donor for bone marrow transplant procedure doesn’t necessarily have to be a relative. But, the siblings are bound to have more compatibility than the parents and are a better option to be considered if no other donor is available.

Answer: a
Explanation: Tissue Engineering is considered as a miraculous solution to Organ shortage, as we no more have to wait for a compatible donor to die. On the other hand Xeno-transplantation, Iso-transplantation and Allo-transplantation involve donors from whom the particular organ concerned can only be taken when they die.

15. Which of the following is a major focus of a technique of tissue engineering called autologous chondrocyte transplantation (ACT)?
a) Cartilage
b) Bone
c) Skin
d) Stem Cells
View Answer

Answer: a
Explanation: Cartilage is the main focus of the technique named autologous chondrocyte transplantation (ACT). In the ACT, chondrocytes are isolated from the biopsy of healthy cartilage and cultured in vitro for a few weeks to reach a sufficient number of cells.