1. What is the marked part in the diagram of a blood vessel’s cross-section in a triploblastic organism? 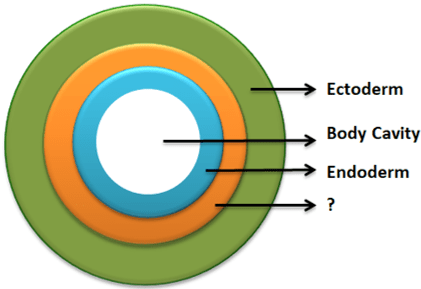 Answer: a
Explanation: The innermost germ layer is endoderm followed by mesoderm in the middle followed by the outermost layer called ectoderm.

2. Which of the following cell types are derived from the mesoderm?
a) Red Blood cells
b) Adherent cells
c) Stem cells
d) Carcinoma cells
View Answer

Answer: a
Explanation: The process of formation of muscles especially during embryonic development from the mesodermal germ layer is termed as myogenesis.

4. Mesoderm has the ability to induce the formation of the neural plate.
a) TRUE
b) FALSE
View Answer

Answer: a
Explanation: The neural plate formation process is initiated by the signals sent from the dorsal mesoderm to the ectodermal cells above it to convert into columnar neural-plate cells.

Answer: a
Explanation: During the gastrulation period the single-layered blastula develops into a trilaminar (three layered) structure called gastrula. These layers are called germ layers, ectoderm, mesoderm and ectoderm.

6. The paraxial mesoderm is one of the important segments of mesoderm.
a) TRUE
b) FALSE
View Answer

Answer: b
Explanation: The mesoderm is one of the three germ layers formed during the process of gastrulation. The mesoderm has three important compartments, paraxial mesoderm, lateral plate mesoderm, and intermediate mesoderm.

7. The somitomeres are formed by the paraxial mesoderm, theses somitomeres give rise to the mesenchyme of the head.
a) TRUE
b) FALSE
View Answer

Answer: a
Explanation: The blood vessels, blood cells along with the heart in the circulatory system as well as the limbs’ mesodermal components arise from the lateral plate mesoderm.

9. Label the part where the arrow is pointing.

10. In the case of Diploblasts, the non-living layer in the middle of ectoderm and endoderm is called ___________
a) mesoglea
b) mesoderm
c) endotherm
d) ectoderm
View Answer