1. _________ are devices used to detect the presence or concentration of a biological analyte, such as a biomolecule, a biological structure or a microorganism.
a) Biosensors
b) Transducers
c) Optic Fiber
d) Regulator
View Answer

Answer: a
Explanation: Biosensors are gadgets used to distinguish the nearness or convergence of an organic analyte, for example, a biomolecule, a natural structure or a microorganism. Biosensors comprise of three sections: a part that perceives the analyte and produces a sign, a sign transducer, and a reader gadget.

2. A _________ crystal is a part of a sensor which primarily works using the principle of oscillation changes because of the mass bound to the surface of the piezoelectric crystal.
a) Piezoelectric
b) Shiny
c) Hard
d) Fluorescent
View Answer

3. The __________ is a biomolecule that recognizes the target analyte whereas the transducer converts the recognition event into a measurable signal.
a) Bioreceptor
b) Biosignal
c) Biodegradation
d) Bioselectivity
View Answer

Answer: a
Explanation: In a biosensor, the bioreceptor is intended to interface with the particular analyte important to deliver an impact quantifiable by the transducer. High selectivity for the analyte among a lattice of other concoction or natural parts is a key necessity of the bioreceptor. While the kind of biomolecule utilized can shift generally, biosensors can be ordered by basic sorts of bioreceptor cooperations including counteracting agent/antigen, catalysts/ligands, nucleic acids/DNA, cell structures/cells, or biomimetic materials.

4. Surface plasmon resonance (SPR) is the resonant oscillation of conduction electrons at the interface between negative and positive permittivity material stimulated by incident light.
a) TRUE
b) FALSE
View Answer

Answer: a
Explanation: Surface plasmon resonance (SPR) is the full swaying of conduction electrons at the interface among negative and positive permittivity material invigorated by episode light. SPR is the reason for various standardized instruments for assessing the adsorption of material onto planar metal (usually gold or silver) surfaces or onto the outer surface of metal nanoparticles. It is an important rule behind many concealing based biosensor applications, various “lab on a chip” sensors, and diatom photosynthesis.

Answer: a
Explanation: A fiber optic sensor is a sensor that utilizations optical fiber either as the detecting component (“natural sensors”) or as a method for handing-off sign from a remote sensor to the gadgets that procedure the sign (“extraneous sensors”). Strands have numerous utilizations in remote detecting.

6. Sucrose is a way of testing for glycemia.
a) TRUE
b) FALSE
View Answer

Answer: b
Explanation: Blood glucose monitoring is a method for testing the convergence of glucose in the blood (glycemia). Especially significant in diabetes the board, a blood glucose test is commonly performed by penetrating the skin (ordinarily, on the finger) to draw blood, at that point applying the blood to a synthetically dynamic expendable ‘test-strip’. Various producers utilize diverse innovation, however most frameworks measure an electrical trademark and utilize this to decide the glucose level in the blood. The test is normally alluded to as slim blood glucose.

7. Small molecule sensors are an effective way to detect the presence of fungal cells.
a) TRUE
b) FALSE
View Answer

Answer: b
Explanation: Small molecule sensors are a compelling method to recognize the nearness of metal particles in solution. Although numerous sorts exist, most little atom sensors involve a subunit that specifically ties to a metal that thusly initiates an adjustment in a fluorescent subunit. This change can be seen in the little atom sensor’s range, which can be observed utilizing a location framework, for example, a magnifying instrument or a photodiode.

8. What does the following diagram depict? 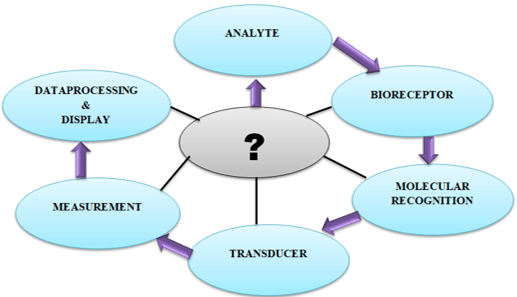 Answer: a
Explanation: Biosensors are worked dependent on the guideline of sign transduction. These parts incorporate a bio-acknowledgment component, a bio-transducer and an electronic framework made out of a showcase, processor, and intensifier. The bio-acknowledgment component, basically a bioreceptor, is permitted to collaborate with a particular analyte. The transducer estimates this connection and yields a sign. The force of the sign yield is corresponding to the centralization of the analyte. The sign is then enhanced and prepared by the electronic framework.