This set of Finite Element Method Interview Questions and Answers focuses on “One Dimensional Problems – Assembly of the Global Stiffness Matrix and Load Vector”.

Answer: b
Explanation: The stiffness matrix represents the system of linear equations that must be solved in order to ascertain an approximate solution to differential equation.

Answer: a
Explanation: Strain energy is defined as the energy stored in the body due to deformation. The strain energy per unit volume is known as strain energy density and the area under stress-strain curve towards the point of deformation. When the applied force is released, the system returns to its original shape.

5. For an element as given below, what will be the 1ST element stiffness matrix? 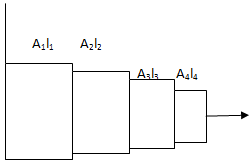 9. By element stiffness matrix we can get relation of members in an object in _____
a) Different matrices
b) One matrix
c) Identity matrix
d) Singular matrix
View Answer

Answer: b
Explanation: When the workload increases on the system, the machine scales up by adding more RAM, CPU and storage spaces.

To practice all areas of Finite Element Method for Interviews, here is complete set of 1000+ Multiple Choice Questions and Answers.