1. A river flows along node 1 through node 5, infiltrating an aquifer at a constant rate. What is the value of s1a+s2a+s3c+s4c if s denotes a linear interpolation function in FEM? 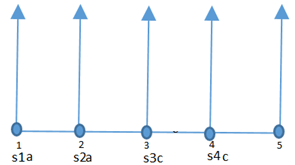 2. In a thermodynamics process, what is the correct term for the series of states through which a system passes?
a) Path
b) Phase
c) Cycle
d) Direction
View Answer

Answer: a
Explanation: A thermodynamic path is series of states through which a system passes from an initial state of equilibrium to a final state of equilibrium and can be plotted on a pressure-volume (P-V), pressure-temperature (P-T), and temperature-entropy (T-s) diagrams to view graphically. Phase is a quantity of matter that can be separated mechanically from a heterogeneous mixture.

3. A river flows along node 1 through node 4, infiltrating an aquifer at constant rate of 5(m3/day*m2). The length of elements shown is 2m. What is the value of global force due to infiltration of the river at node 2? 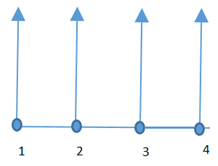 Answer: d
Explanation: Quasi-static Process, in thermodynamics, is a process that happens infinitely slowly. However, it is very important to note that no real process is Quasistatic. A Quasistatic process ensures that the system will go through a sequence of states that are infinitesimally close to equilibrium.

Answer: b
Explanation: In thermodynamics, an open system freely exchanges matter and energy with its surroundings. For instance, when you are boiling water in an open bowl on a stove, energy and matter are being transferred to the surroundings through steam. In this case, the volume remains constant making it a control volume process.

9. Consider the wall of a tank containing a hot liquid at a temperature T0, with an airstream passed on the outside, maintaining a wall temperature of TL at the boundary. From the figure shown,what is the boundary condition at X=0? 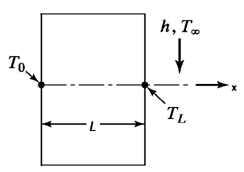 10. In thermodynamics, what is the name of a process with identical end states?
a) Cycle
b) Path
c) Phase
d) Either Path or phase
View Answer

11. For the given heat radiation equation, which of the following terminology is not correct?
q{x}n{x}+q{y}n{y}+q{z}n{z}=σε\(T_{\{s\}}^{\{4\}}\)-αq{r}
a) α is Stefan-Boltzmann constant
b) σ is the surface emission coefficient
c) ε is surface absorption coefficient
d) qr is heat generated per unit surface area
View Answer