This set of Aerospace Materials and Processes Multiple Choice Questions & Answers (MCQs) focuses on “Magnesium and its Alloys-1”.

Answer: c
Explanation: Magnesium alloys have a set of physical and chemical properties that describe or denote their characteristics. Magnesium alloys are not magnetic nature. Also, unlike some other elements, they are non-sparkling.
Subscribe Now: Aerospace Materials Newsletter | Important Subjects Newsletters

Answer: a
Explanation: Alloying an element with other elements is known to produce some advantageous and desired properties that can be used for several industrial and scientific purposes. Magnesium is frequently alloyed with aluminium and zinc.

Answer: c
Explanation: Magnesium is a metal/element that is commonly used in the aircraft industry due to its advantageous properties. It is a silvery-white metal. Lead is a metal that is bluish-grey in colour. Sulphur and chlorine are yellow.
Check this: Aeronautical Engineering Books | Aerospace Engineering Books
advertisement

Answer: d
Explanation: Magnesium is a very beneficial element to use due to its weight. It is a very lightweight metal and weighs around 65% of aluminium. It does not possess a high amount of strength but is used when strength is not the primary factor being considered.

8. Magnesium is frequently found in its natural state.
a) True
b) False
View Answer

9. Magnesium is found in only two ores in the world.
a) True
b) False
View Answer

Answer: b
Explanation: The above statement is incorrect. Magnesium is not found in just two ores, but it is found in several ores all over the world. For example, some of the magnesium ores are magnesite, dolomite, carnallite, etc.
advertisement

To practice all areas of Aerospace Materials and Processes, here is complete set of 1000+ Multiple Choice Questions and Answers. 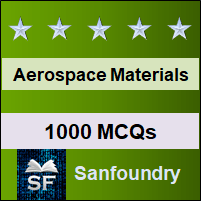