Answer: d
Explanation: Properties of a metal that is often required to consider by corrosion engineers are:
advertisement

2. Which of the following is not a mechanical property of a metal?
a) Impact strength
b) Creep strength
c) Modulus of elasticity
d) Stress-rupture
View Answer

Answer: c
Explanation: At a certain point, modulus of elasticity is considered as the physical property of a metal. Because it is an inherent property that cannot be changed by heat treatment or cold working.

Answer: a
Explanation: The composition of Durichlor is 14% silicon, 0.95% carbon, and 3% molybdenum. It is a high-silicon cast iron that has the highest corrosion resistance among cast irons.

5. The excellent corrosion resistance of high-silicon irons is due to the formation of a passive SiO2 surface layer.
a) True
b) False
View Answer

Answer: a
Explanation: High-silicon cast iron is the type of alloy cast Irons that are formed with high silicon content (up to 14%). The excellent corrosion resistance of these alloys is due to the formation of a passive SiO2 layer.

Answer: d
Explanation: Ingot and Armco iron are regarded as pure irons commercially. These are relatively weak and not used where strength is a major requirement. Whereas wrought iron is a mechanical mixture of slag and low-carbon steel.

Answer: b
Explanation: The iron-carbon phase diagram is an equilibrium phase diagram formed with carbon percentage and temperature parameters on the x and y-axis respectively. It consists of various phases such as alpha iron, austenite phase, delta iron, and its combinations.

9. Which of the following statements are correct regarding the austenite phase in an iron-carbon phase diagram?
a) It is non-magnetic in nature
b) The maximum percentage of carbon is 2.1%
c) It has a face-centered cubic structure
d) The austenitic phase has a face-centered cubic structure with a 2.1% maximum percent carbon and non-magnetic in nature.
View Answer

Answer: d
Explanation: Austenite is one of the phases in the iron-carbon phase diagram. It has a face-centered cubic structure with 2.1% maximum percent carbon and it is non-magnetic in nature.

Answer: c
Explanation: Magnesium is one of the lightest commercial metal with specific gravity 1.74. It is utilized in trucks, automobile engines, aircraft, and missiles. Whereas metals such as stainless steel, carbon steels, and cast irons are regarded as heavy metals.

12. Which of the following corrosion products of lead serve as protective films?
a) Lead sulfates
b) Lead oxides
c) Lead phosphates
d) Sulfates, oxides, and phosphates of lead
View Answer

Answer: d
Explanation: Lead and its alloys are usually used piping, radiation shield, and storage batteries. It is resistant to corrosion in sulfuric acid, chromic acid, and phosphoric acid. Sulfates, oxides, and phosphates of lead are the corrosion products of lead that act as protective films.

13. Which of the following alloying element of stainless steel that attributes a large increase in stress-corrosion resistance?
a) Nickel
b) Chromium
c) Carbon
d) Nickel and chromium
View Answer

Answer: a
Explanation: Stainless steel is a generic term that attributes to the alloy system of iron-carbon-chromium and nickel. Addition of nickel as alloying element up to 10% attributes in a rapid and large increase in stress-corrosion resistance of stainless steel.

14. Which of the following metal/alloy has the highest stress-corrosion resistance?
a) Aluminum
b) Inconel
c) Stainless steel
d) Titanium
View Answer

Answer: b
Explanation: Typical composition of an Inconel is chromium 20-23%, iron 5%, molybdenum 8-10% and nickel around 60-65%. Inconel has the highest stress-corrosion resistance whereas aluminum, stainless steel, and titanium are prone to stress corrosion cracking.

15. Which of the following metals will have the same crystal structure as that of the given figure? 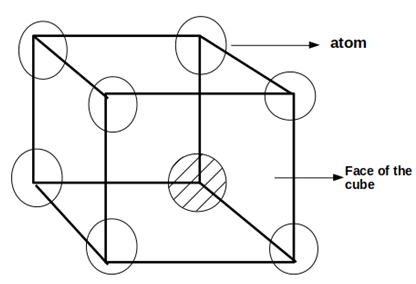 Answer: b
Explanation: The given figure depicts a face-centered crystal structure. Nickel is face-centered cubic structure material whereas zinc and titanium are hexagonal closed packed structures. 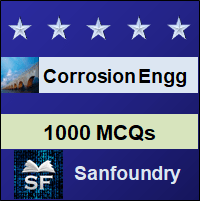