Answer: d
Explanation: Chloroplast are small cell organelles found in both eukaryotic and some prokaryotic photosynthetic organisms. They were first discovered by Konstantin Mereschkowski in 1905.
advertisement

Answer: c
Explanation: The chloroplasts have their own DNA, which is circular in shape that forms a ring like structure. A single chloroplast DNA has a mass of about 80 – 130 million daltons.

5. Identify A and B from the below figure. 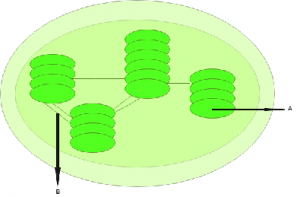 Answer: b
Explanation: Thylakoids resemble the structure of a coin, a stack of thylakoids looks like a stack of coins known as grana. The lumen is a connection between two or more grana.
advertisement

6. The sunlight is captured by the membrane of thylakoids.
a) True
b) False
View Answer

Answer: a
Explanation: The membrane of thylakoids is responsible for photosynthesis. They entrap the solar energy and provide it for the photosynthesis.

7. Which pigment is responsible for the process of sunlight?
a) Chlorophyll a
b) Chlorophyll b
c) Xanthophyll
d) Anthocyanin
View Answer

Answer: a
Explanation: Chlorophyll a is the pigment, which primarily helps in photosynthesis. Xanthophyll and Anthocyanin are the pigments responsible for yellow and blue colour in plants respectively.

8. Which pigment constitutes majorly in absorbing sunlight for photosynthesis?
a) Chlorophyll a
b) Chlorophyll b
c) Xanthophyll
d) Anthocyanin
View Answer

Answer: b
Explanation: Chlorophyll b is a pigment, which is yellow in colour. This pigment is responsible for the vast absorption of sunlight. It is present in the light absorbing antenna of the plants.

9. Which of the following organisms has photosynthetic pigments in it?
a) Yeast
b) Nitrosomonas
c) Spirulina
d) Phosphobacter
View Answer

Answer: c
Explanation: The spirulina, which belongs to the community of cyanobacteria, commonly known as blue green algae, has photosynthetic pigments in it. They predominantly contain chlorophyll a.

Answer: b
Explanation: The chlorophyll a contains a magnesium ion complex, which forms a ring structure called the Chlorin ring. It has a molar mass of 893.51 g•mol−1.
advertisement

Answer: a
Explanation: Chloroplasts cannot be synthesized by the cell itself. They have their own DNA and it divides by binary fission process like prokaryotes.

12. What disease is caused by the dysfunction of chloroplast?
a) Leaf spot
b) Blight spot
c) Leaf variegation
d) Powdery mildew
View Answer

Answer: c
Explanation: Leaf variegation is caused by the deficiency of chloroplast due to mutation. Blight spot, Leaf spot and Powdery mildew are caused by fungi.

To practice all areas of Cell Biology, here is complete set of 1000+ Multiple Choice Questions and Answers.