Answer: b
Explanation: If the light is incident on an optically denser medium, then the speed of light will be lower in that medium. Hence, the refracted ray would be bent towards the normal. Thus, the angle of refraction would be less than the angle of incidence.

3. When light is incident on a parallel-sided slab on one side, the shift between the incident and emergent ray is called as _____________
a) Parallel Shift
b) Ray Shift
c) Lateral Shift
d) Normal Shift
View Answer

4. Arrange the slabs in the increasing order of the refractive index. 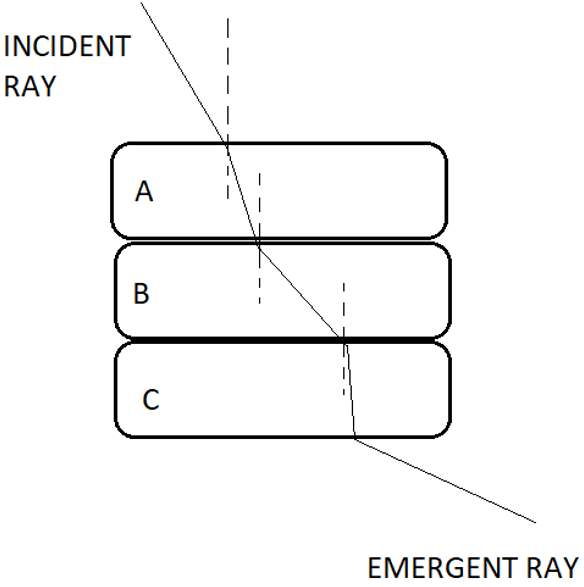 Answer: c
Explanation: As we know, the ray bends towards the normal if the medium is optically denser. Hence, by observing the shift in the direction of incident light between A and B, we realize that the refractive index of A is greater than B. Similarly, R.I of C is greater than A and B. Thus, the right order is C > A > B.

5. The speed of light in medium A is 1.4 X 108m/s. What is the refractive index of the medium?
a) Colored Image form
b) Black and white image form
c) 3-D image form
d) Coded form
View Answer

7. What is the difference between the actual sunset and apparent sunset?
a) 2 seconds
b) 30 seconds
c) 1 minute
d) 2 minutes
View Answer

10. Which color appears at the top when white light is incident on a glass prism?
a) Violet
b) Indigo
c) Red
d) Yellow
View Answer

Answer: c
Explanation: Red color has the highest wavelength. Subsequently, it’s speed is maximum in a glass prism. Thus, it suffers the least diversion from its path, compared to other and emerges at the top of the spectra. This phenomenon of splitting of light is known as dispersion.