This set of Engineering Physics Question Paper focuses on “Production of Circular and Elliptically Polarized Light”.

Answer: a
Explanation: When an unpolarized beam is incident on a Nicol prism, it splits into two components – ordinary and extraordinary. The ordinary components are internally reflected and the emergent beam is plane-polarized.

2. What should be the phase difference between the two plane-polarized waves, vibrating at right angles to each other, to produce circularly polarized light?
a) π/6
b) π/2
c) π/4
d) π/3
View Answer

3. Which of the following component is not used during the production of circularly polarized light?
a) Nicol Prism
b) Quarter-wave plate
c) Half-wave plate
d) Light source
View Answer

Answer: c
Explanation: To produce circularly polarized light, two Nicole prisms are crossed and a quarter-wave plate is placed between them so as to introduce a phase difference between the rays.
Subscribe Now: Engineering Physics II Newsletter | Important Subjects Newsletters

4. If the phase difference between two rays is π/2 and the angle of incidence is not equal to π/4, the emergent light is ____________
a) Linearly Polarized
b) Elliptically Polarized
c) Circularly Polarized
d) Non-Polarized
View Answer

5. A beam of light is allowed to fall on a Nicol Prism. The prism is rotated. If the light gets completely extinguished twice in one rotation, the nature of the light is __________
a) Unpolarized
b) Plane Polarized
c) Circularly Polarized
d) Elliptically Polarized
View Answer

Answer: b
Explanation: When a Nicol Prism is rotated, then there would be two stages when the plane polarized light would get completely blocked from passing through the prism, as the arrangement of molecules would be in such a direction that it eliminated the vibration.
Become Top Ranker in Engineering Physics II Now!

7. A beam of light is incident on a rotating prism. If the intensity of the light changes from a maximum to a minimum (not zero), what is the nature of the incident beam?
a) Unpolarized
b) Plane Polarized
c) Circularly Polarized
d) Elliptically Polarized
View Answer

Answer: d
Explanation: In this case, the incident beam is elliptically polarized light. The intensity is maximum when the principal plane of the Nicol prism is parallel to the major axis of the ellipse and minimum, when parallel to the minor axis.
advertisement

8. When a light is analyzed, following observations are made. What is the nature of the light? 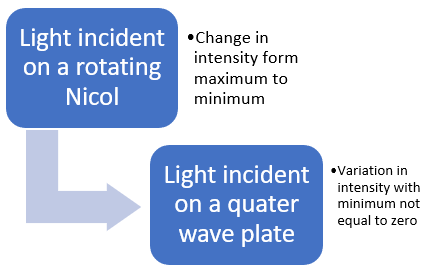 To practice all questions papers on Engineering Physics, here is complete set of 1000+ Multiple Choice Questions and Answers.