Answer: c
Explanation: Buckminsterfullerene, commonly known as fullerene, consists of 20 hexagons and 12 pentagons, which are arrayed such that no two pentagons share a common side.
advertisement

Answer: d
Explanation: C60 molecules are held together by weak Van der Waal’s forces. They are insoluble in ionic solvents like water, ammonia and HCl, as it is non-ionic. As it is an organic molecule, it is soluble in Benzene.

Answer: a
Explanation: Carbon nanotubes, CNTs, are nanostructures with large application potential. Its structure consists of a single sheet of graphite rolled into a tube.

4. CNTs are capped on both ends with which carbon nanostructure?
a) Graphite
b) Diamond
c) C60
d) Benzene
View Answer

Answer: c
Explanation: Carbon Nanotubes are basically a single sheet of graphite, which is rolled into a tube. The ends of the CNTs are covered by the C60 hemispheres. Such is the construction of a CNT.

Answer: b
Explanation: For the synthesis of CNTs, a quartz tube containing argon gas and a graphite target are heated to 1200o C. This process takes place by the use of lasers.
advertisement

6. The metallic tubes have which kind of structure?
a) Armchair
b) Chiral
c) Boat
d) Achiral
View Answer

7. The carbon tubes have high conductivity.
a) True
b) False
View Answer

Answer: a
Explanation: The reason for the high conductivity of the carbon nanotubes is that they have very few defects to scatter electrons and therefore show very low resistance.

Answer: b
Explanation: The given figure shows the schematic diagram for synthesis of CNT by laser evaporation. The quartz tube is heated to 1200°. A water called copper collection is present at the end to cool it down.
advertisement

Answer: d
Explanation: Carbon nanotubes are useful in fuel cells as well as in batteries, primarily for storage purposes of hydrogen. The tubes need to gold 6.5% hydrogen by weight. 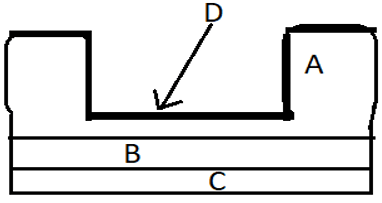 Answer: d
Explanation: In the diagram, A is the source and the drain (gold), B is the insulating layer of silicon dioxide, C is the gat made of silicon substrate and D is the CNT. CNTs are useful as the new generation interconnect structures as well as FETs.