1. How many lenses are used in Fresnel Diffraction?
a) Two Convex lenses
b) Two Concave lenses
c) One Convex lens
d) No lens used
View Answer

Answer: d
Explanation: In Fresnel Diffraction, no lenses are used. The interference takes place between different light waves arriving at a point from the same wavefront. In this case, the phase of all the waves is not the same.

Answer: c
Explanation: The effect at a point fie to any particular zone is proportional to 1 + cosθ, called the obliquity factor. Naturally, the effect is maximum whenθ` = 0.677.

3. In Fresnel diffraction, the relative phase difference between the curved wavefront is ____________
a) Constant
b) Zero
c) Linearly increasing
d) Non=constant
View Answer

Answer: d
Explanation: Since the radii of each half period zone are different, the distance traveled by each wavefront is different. Thus, the relative phase difference turns out to be non-constant.
Sanfoundry Certification Contest of the Month is Live. 100+ Subjects. Participate Now!
advertisement
advertisement

Answer: b
Explanation: In a zone plate, a much brighter image of an object is obtained at the screen, which shows the converging action of a zone plate. Also, it’s equation resembles that of a lens. Thus, the zone plate behaves like a convex lens with multiple foci.
advertisement

11. Which graph is shown in the figure? 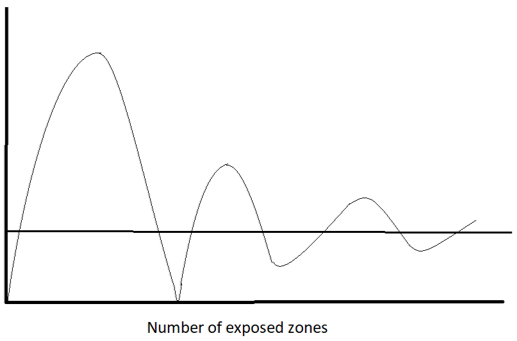 Answer: b
Explanation: The figure shows the variation of intensity with the number of exposed zones. We know, the resultant intensity at O is \(\frac{m_1^2}{4}\). Only the first half period zone is effective in producing the illumination at O.