1. In X-ray emission tubes, X-ray is emitted by the acceleration of _____
a) Atoms
b) Protons
c) Electrons
d) Neutrons
View Answer

Answer: c
Explanation: In X-ray emission tubes, the electrons are accelerated by a very high voltage and then decelerated very fast by introducing a metal plate. In this process, the Kinetic energy of electrons is converted into light energy and, thus, X-ray is emitted.
advertisement

Answer: b
Explanation: The phenomenon of black—body radiations was given by Max Planck. He stated that hot bodies emit radiation over a wide range of wavelengths. An ideal body is the one that emits and absorbs radiation of all frequencies. Such a body called a Black Body and the radiations are called Black body radiations.

3. An iron rod is heated. As it gets heated, it changes color. Which of the following colors indicates a very high temperature?
a) Red
b) Orange
c) White
d) Blue
View Answer

Answer: d
Explanation: As the body gets hotter, the frequency of the emitted radiation keeps on increasing. Blue color has the highest frequency out of red, orange and white. Thus, as the iron rod gets heated first it would become red, then orange, then white and then finally blue.
Sanfoundry Certification Contest of the Month is Live. 100+ Subjects. Participate Now!
advertisement
advertisement

4. Which of the following may not be conserved in a photon-particle collision?
a) Total Energy
b) Total momentum
c) Number of photons
d) Number of particles
View Answer

Answer: c
Explanation: Electron in the ground state is extremely stable. Hence, when an electron is in an excited state it tends to come back to its ground state. In this process, a photon is emitted. The Emitted photon has energy equal to the energy difference between the two energy states.
Check this: Engineering Physics II Books
advertisement

Answer: a
Explanation: Stimulated emission is the process in which matter at high energy state is perturbed by a photon having energy equal to the energy difference between the current excited state and a lower state. The matter jumps back to the lower state releasing another photon of the same energy. This process is used for the generation of LASERS.

Answer: d
Explanation: Gamma rays lie in the upper frequency of the electromagnetic spectrum. It is produced in a nuclear reaction and also emitted in radioactive nuclei. Due to their high penetration power, they are used to destroy cancer cells.
advertisement

11. Klystron valve and Magnetron valve are used for the production of ___________
a) Radio Waves
b) Micro Waves
c) Infra-red
d) Ultraviolet
View Answer

Answer: b
Explanation: Microwaves are also called short-wavelength radio waves. They are produced by special vacuum tubes called klystron valve, magnetron valves, and Gunn diodes. They are used in the radar system as they have a short wavelength.

12. Photons are electrically neutral and are not deflected by electric and magnetic fields.
a) True
b) False
View Answer

Answer: a
Explanation: Photons are considered to have no charge. They are simply quanta of energy. They are not affected by the presence of the electric and magnetic fields.

13. What will be the energy of the photon emitted in the following case? 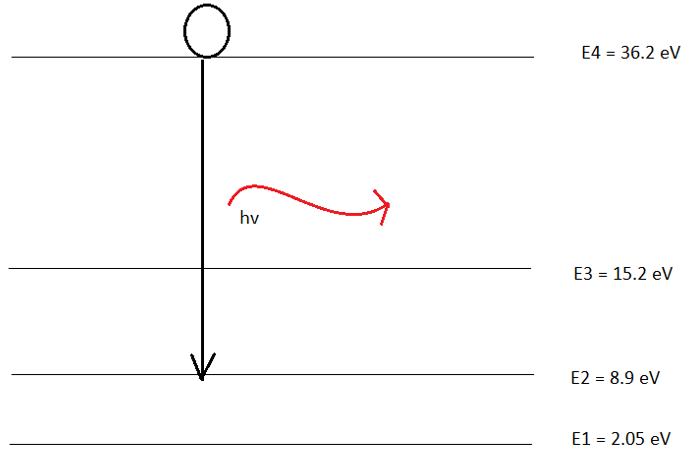 Answer: c
Explanation: Whenever an electron makes a transit from an excited state to a lower state, the photon released has the energy equal to the energy difference between the two states. In this case, the Energy difference = E4 – E2 = 27.3 eV.