Answer: c
Explanation: In this case, the population of atoms in the exited state is more than that in the ground state. This condition is known as population inversion and in this case, stimulated emission is dominant.

Answer: c
Explanation: Pumping is the process in which the atoms from the lower energy states are excited to meta-stable states by some external source so as to create population inversion.

Answer: d
Explanation: When N1 > N2, the population of atoms in the ground state is higher than that in the exited state. In this case, absorption is dominant and hence, the intensity of light wave decreases exponentially.
Check this: Engineering Physics II Books

6. To achieve optical amplifications, it is essential to create a non-equilibrium distribution of atoms.
a) True
b) False
View Answer

Answer: a
Explanation: We know, N2/N1 = e\(\frac{-hv}{kT}\). Thus, in normal situation, N1 > N2 for E1 < E2. Thus, to achieve lasing action, non-equilibrium distribution of atoms in such a way that the population of the upper energy is greater than that of the lower energy level. 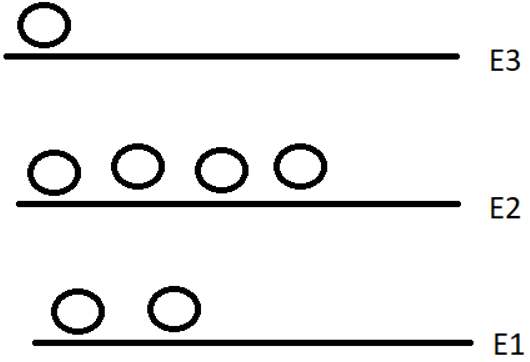 Answer: a
Explanation: Between E2 and E1, there are more electrons in E2 level and it also has higher energy. Hence, population inversion exists between E2 and E1.
advertisement

10. Which of the following is a four-level laser?
a) ND: YAG
b) Ruby
c) He-Ne
d) Semiconductor laser
View Answer

Answer: c
Explanation: He-Ne laser is a four-level laser. Whenever an electric discharge is passed through the gas, the helium atoms gets to higher energy states, as the concentration of helium atoms is higher to achieve population inversion.