Answer: a
Explanation: The clear all command keeps all the local variables of the function unaffected i.e. they prevent their values from getting changed due to some previous usage of the function. The close all command closes all the graphs the clc command removes the written code.

2. A loop is used to avoid repetitive writing of the same function in the code.
a) True
b) False
View Answer

Answer: a
Explanation: The purpose of using loops is to avoid writing the same line multiple times. The same line may be a particular function which computes a certain value. For the sake of accuracy, we may run the function multiple times, within a loop.

Answer: c
Explanation: While debugging, the user can choose to insert a set of instruction to change the nature of the already written program. To return to continue execution, the user can enter either dbcont or the return command.
Note: Join free Sanfoundry classes at Telegram or Youtube
advertisement
advertisement

4. The plotting of 3d plots and 2d plots requires separate windows. But the user has entered the hold on command. What is to be done?
a) Use the pause command
b) Use the hold off command
c) Use the close command
d) Nothing can be done
View Answer

5. What will be the output of the following code?

Answer: c
Explanation: The sine curve is a continuous signal or a discrete signal. So the tendency of every point in the curve has to follow a radian frequency and not a step frequency. Here the frequency of time is stepping up by 1, so the sine curve will only consist of 11 values, which will lead to the sine curve appearing to be broken.
Output: 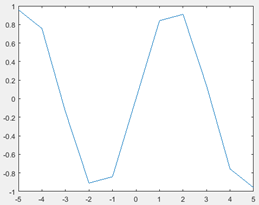 Answer: a
Explanation: The exponential inter-relation will appear as a straight line in a log scale. This is because logarithmic scale and exponential nature follow a linear relationship. If there are no other terms than exponentials in the expression, the graph will be a linear one.

7. There will be a problem in computing the logarithm of a negative number.
a) True
b) False
View Answer

8. Global variables must be mentioned _____ an M-file.
a) at the top in
b) anywhere in
c) out of the
d) there is nothing called global variables
View Answer

9. To stop execution, press _____
a) Ctrl+C
b) Use pause command
c) Use end command
d) Use keyboard command
View Answer

10. The function definition is shown when we use the look for the command.
a) True
b) False
View Answer

To practice all areas of MATLAB, here is complete set of 1000+ Multiple Choice Questions and Answers.