This set of MATLAB Problems focuses on “Modeling – 2”.

Answer: a
Explanation: Not only by blocks, but electronic components are also present in the Simscape toolbox. We can simulate the working of circuits via this toolbox. We would need a source and the scope to generate and view waveforms of input and output respectively.
advertisement

2. Photodiodes are present in the _________ section of the Simscape toolbox
a) Special Purpose Diodes
b) Semiconductor devices
c) Diodes
d) Sensors
View Answer

Answer: d
Explanation: It is not present in the section mentioned in semiconductor devices, diodes and special purpose diodes, don’t exist as separate sections. It is really present in the sensors section since it acts like a sensor only.

3. Where is the following block present?

Answer: c
Explanation: This block acts as a source and hence it’s placed in the Source section. This is different from ground.
advertisement
advertisement

4. The output in the scope is an analog signal.
a) True
b) False
View Answer

Answer: a
Explanation: The output of the scope always shows as an analog signal. It is recommended to use other means of realizing digital outputs such as bulbs.

5. The Battery is also viewed as a charge dependent source.

Answer: a
Explanation: The battery can be modelled with an internal resistance and an internal capacitance. Hence, the above statement is true.
advertisement

6. We can model __ impulse function in discrete domain
a) No
b) Unit
c) Shifted unit
d) Any
View Answer

7. What does the following model portray?

Answer: b
Explanation: We are giving a discrete impulse signal to the system represented by the transfer function which is that of a ramp function.
Output: 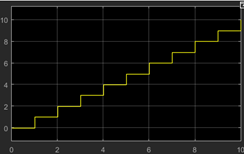 8. What does the following model show?

Answer: a
Explanation: The transfer function represents a ramp function. Now, the scope shows a graph starts from t=8 units in time and goes to 1 at t=9. Thus the impulse input given to the graph is actually shifted by 8 units in time.

9. What does this block do?

To practice all areas of MATLAB Problems, here is complete set of 1000+ Multiple Choice Questions and Answers.