Answer: a
Explanation: Both the OCC as well as short circuit test are used to calculate the d-axis reactance.

Answer: a
Explanation: Slip test is used to determine the q-axis reactance.

a) i is true, ii is false
b) i is false, ii is true
c) both true
d) both false
View Answer

Answer: a
Explanation: The impedance during slip test is low so the voltage drop will be less and the current will be more.

5. A 3 Phase 400, 100 MVA alternator is connected to infinite bus bar. If the mechanical power input is more than the maximum reluctance power, the reluctance generator will lose synchronizm if ____________
a) field is open circuited
b) field is short-circuited
c) load is removed
d) damper is removed
View Answer

Answer: a
Explanation: If the excitation itself is made zero, then machine will stop.

Answer: b
Explanation: It will act as induction motor as there will be difference in the speed.
advertisement

7. When a 3–phase alternator is suddenly short–circuited at its terminals, the initial value of the short–circuit current is limited by which one of the following?
a) x”d
b) x’d
c) xs
d) Sum of x”d, x’d and xs
View Answer

Answer: a
Explanation: When suddenly the terminals of the synchronous machine will be short circuited, at that immediate instant it will be subtransient reactance.

9. The phasor diagram of a synchronous machine connected to an infinite bus is shown in the figure.

Answer: a
Explanation: The induced voltage leads the bus voltage, which means that it is at leading pf and then excitation magnitude is also more than terminal bus voltage.

10. If the excitation of a 3-phase alternator operating on infinite bus bars is changed, which one of the following will get affected?
a) Active real power of machine
b) Reactive power of machine
c) Terminal voltage of machine
d) Frequency of machine
View Answer

Answer: b
Explanation: Excitation is coupled with the reactive power of the machine majorly.

Answer: a
Explanation: Because there is variable air gap due to saliency of the poles.

12. While conducting measurement for Xd and Xq, the information obtained is below.

14. Consider a 3-phase alternator with negligible armature resistance and high rotational inertia delivering power to an isolated load when the armature terminals got short circuited. After sometime, the mechanical power input to the shaft of the machine is terminated at time t0. The short-circuit current circulating in the armature will change till the machine comes to halt at ‘ts’. Which one of the curves depicts this phenomena?
a) 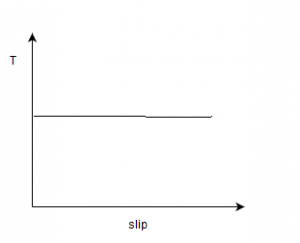 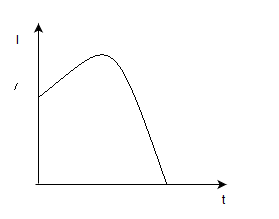 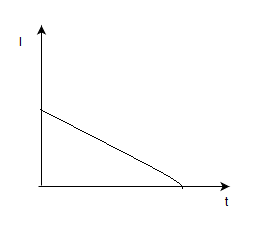 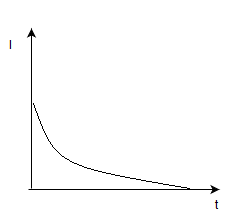 Answer: a
Explanation: The short circuit current will be a constant value till it flows.

15. A stationary alternator is connected to the infinite bus. It should not be connected because ____________
a) it will get short circuited
b) it will operate as induction motor
c) it will reduce bus bar voltage
d) all of the mentioned
View Answer

Answer: a
Explanation: When a stationary synchronous machine is connected to the infinite bus, due to lack of synchronism there will be short circuit in the machine as the impedance reached very negligible.

16. Which of the options given will have no effect on the working of the synchronous motor if ignored?
a) It has comparable reactance
b) It requires dc excitation
c) It can not be started under no load
d) It has tendency to hunt
View Answer

Answer: a
Explanation: The medium reactance is not any disadvantage to the synchronous machine.

Answer: a
Explanation: As the relative speed will be zero in the damper winding and the torque too.

Answer: a
Explanation: Slip test is used to determine the direct axis and quadrature axis reactance.

To practice all areas of Electrical Machines, here is complete set of 1000+ Multiple Choice Questions and Answers.