1. The output voltage seen at the CRO connected at the secondary terminals is square wave. Then the flux density used for energizing the primary is?
a) triangular
b) sinusoidal
c) saw tooth wave
d) square wave
View Answer

Answer: a
Explanation: E = -N*dϕ/dt. Integration of square wave will be triangular in nature.

2. The non linear magnetization curve of a practical transformer will introduce _____________
a) heating
b) higher order harmonics
c) magnetostriction
d) all of the mentioned
View Answer

Answer: d
Explanation: If the magnetization is non linear in nature then it will cause a saturation in the core and harmonics will be introduced to cause humming sounds.

Answer: c
Explanation: As per the Faraday’s laws, the emf will be induced when flux is time varying as in transformer, there is no moving part.

4. If a transformer is fed from a 220V and dc supply rather than a 1-phase ac supply, then the transformer will ___________
a) burn its windings
b) operate normal
c) will not operate
d) will give very small leakage flux
View Answer

Answer: a
Explanation: Dc is nothing but ac at zero frequency. So the reactance offered will be zero at dc and the current will be limited only by the small resistance of the winding which will produce very high amount of current to flow through the windings, so burning them up.

Answer: a
Explanation: Impedance is transformed in square of the turns-ratio.

6. A transformer has sometimes more than two ratings depending upon the use of ___________
a) the cooling application
b) type of windings
c) type of core
d) type of insulation to be given
View Answer

Answer: a
Explanation: Yes, with different types of the cooling methods, the losses can be varied and so the current and the voltages.

Answer: b
Explanation: The reluctance of the path increases here after making the cut. so the magnetizing current will increase but the core flux will be same as it depends on the applied voltage not the reluctance.
advertisement

8. In an oil filled transformer, the application of oil is for ___________
a) cooling
b) insulation
c) both cooling and insulation
d) preventing the accumulation of dust
View Answer

Answer: c
Explanation: Oil can be used not only for cooling but also for insulation from the metallic parts.

10. Which of the following two are matched correctly?

Answer: b
Explanation: The air gap is very less in the transformer, so the magnetizing current needed is around 2-6% only.

Answer: c
Explanation: Output will follow the shape of input wave. As the primary input is triangular in shape, its secondary will also be same. 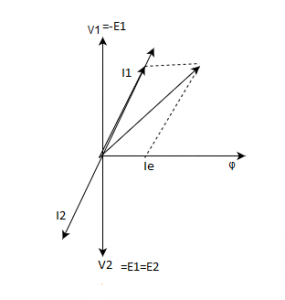 Answer: a
Explanation: The per unit value does not change from the winding side of a transformer.

To practice all areas of Electrical Machines, here is complete set of 1000+ Multiple Choice Questions and Answers.