This set of Signals & Systems Multiple Choice Questions & Answers (MCQs) focuses on “Properties of Systems – I”.

Answer: a
Explanation: y[n] depends upon x[n-1], i.e at the earlier time instant, thus forcing the system to have memory.

3. y[t]= ∫x[t],t ranges from 0 to t. Is the system a memoryless one?
a) Yes
b) No
c) Both memoryless and having memory
d) None of the Mentioned
View Answer

Answer: b
Explanation: While evaluating the integral, it becomes imperative to know the values of x[t] from 0 to t, thus making the system requiring memory.
advertisement
advertisement

Answer: a
Explanation: The output at any time t = A, requires knowing the input at an earlier time, t = A – 1, hence making the system require memory aspects.

Answer: c
Explanation: For positive time, the system may seem to be causal. However, for negative time, the output depends on time at a positive sign, thus being in the future, enforcing non causality.
advertisement

Answer: c
Explanation: For a time instant existing between 0 and 1, it would depend on the input at a time in the future as well, hence being non causal.

Answer: d
Explanation: For positive time, the system may seem to be causal. For negative time, the output depends on the same time instant, thus making it causal.
advertisement

Answer: d
Explanation: The function obeys the scaling/homogeneity property, but doesn’t obey the additivity property, thus not being linear.

To practice all areas of Signals & Systems, here is complete set of 1000+ Multiple Choice Questions and Answers. 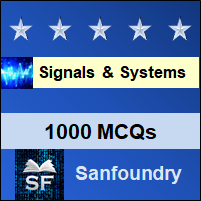