1. In a multiple effect evaporator, the pressure __________ as we move to subsequent effects.
a) Decreases
b) Increases
c) Remains same
d) Doubles
View Answer

Answer: a
Explanation: Because the boiling temperature of water decreases as pressure decreases, the setups are made to allow us to use the superheat of one of the setup to heat the subsequent ones.
advertisement

Answer: a
Explanation: The main reason to reduce the pressure is to be able to decrease the boiling point so that the previous effect’s vapour can evaporate the water in this effect. Because the boiling temperature of water decreases as pressure decreases, the setups are so made to allow us to use the superheat of one of the setup to heat the subsequent ones.

3. What is the number of effects used in the following setup?.

Answer: a
Explanation: As visible from the diagram, the number of effects in the given evaporator is three, hence its name- triple effect. The 1st effect has outside steam supply to heat, rest have recycled vapour.
Sanfoundry Certification Contest of the Month is Live. 100+ Subjects. Participate Now!
advertisement
advertisement

Answer: c
Explanation: The size of the evaporator does not matter to increase the rate of evaporation whatsoever, but keeping them all the same size helps reduce manufacturing cost.

5. Which one of the following evaporator is usually preferred for operation in a multiple effect for less viscous liquids?
a) Falling film long tube
b) Agitated vessel
c) Rising film
d) Plate type evaporator
View Answer

Answer: a
Explanation: The falling film is most well suited for operation if we want to use it for low viscous fluids as it is cheap for both construction and operation.
Check this: Heat Transfer Operations Books | Chemical Engineering MCQs
advertisement

6. Which one of the following evaporator setup is the most versatile of all evaporators?
a) Falling film long tube
b) Agitated vessel
c) Rising film
d) Plate type evaporator
View Answer

Answer: b
Explanation: The agitated vessel evaporator is the most versatile evaporator as it allows us and give the industry the liberty to use thin or thick fluids, viscous or non-viscous ones, and also the fouling and scaling ones without any extra maintenance.

Answer: a
Explanation: Multiple effect evaporation usually uses sensible heat in the condensate to preheat liquor to be evaporated. Hence as the pressure drops significantly in subsequent effects, the feed is always flashed into these effects, thus the flash system is predominant.
advertisement

8. The vapours entering into the steam chest of respective effects of a multiple effect evaporator are at their saturation temperature.
a) True
b) False
View Answer

Answer: a
Explanation: The basic assumption that is made that the entering steam is at their boiling point just to reduce the amount of calculations.

9. Which one of the following is not an assumption in multiple effect evaporator’s calculations?
a) There is no sub cooling of the condensate from different steam chests
b) Heat transfer surface does not undergo fouling
c) The entering steam is at their boiling point
d) Pressure is same in every effect
View Answer

Answer: d
Explanation: The assumptions that are usually made while designing evaporators are:
advertisement

To practice all areas of Heat Transfer Operations, here is complete set of 1000+ Multiple Choice Questions and Answers. 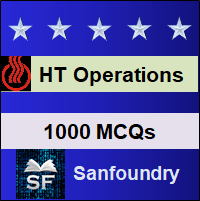