Answer: b
Explanation: Hash list is the list of hashes of the blocks in a set file. Hash tree is a generalization of the hash list in which leaves are labeled with the hash of a data block and every non-leaf node is hash of the labels of its children.
advertisement

Answer: a
Explanation: Hash trees are used in distributed systems for efficient data verification. Hash tree used hashes instead of the full files, hence they are efficient. Because Hashes are ways of encoding files that are much smaller than the actual file itself.

3. Which of the following is a widely used form of the hash tree?
a) B+ – tree
b) T tree
c) Tiger tree hash
d) Htree
View Answer

Answer: c
Explanation: The general form the hash tree which is used widely is the Tiger tree hash. It uses a binary hash tree, usually has a data block size of 1024 bytes and uses the Tiger hash.

Answer: a
Explanation: Hash tree is generally known as Merkle tree after Ralph Merkle who patented it in 1979. Typically Merkle trees have a branching factor of 2, meaning that each node has up to 2 children.
advertisement

Answer: c
Explanation: Consider 8 records A B C D E F G H. These records are stored in Hash tree in as shown in figure below.

7. Where is the hash tree used?
a) in digital currency
b) in sorting of large data
c) for indexing in databases
d) in encryption of data
View Answer

Answer: a
Explanation: Using Hash tree the data verification, data synchronisation and the consistency verification can be done efficiently. So, the hash tree are digital currencies to organise the transactions.

Answer: a
Explanation: To insert a record in the hash tree the key is compressed and hashed to get the slot for the entry. So, a hash tree with branching factor k takes O(logk(n)) for insertion in worst case.

9. Sequential access in a Hash tree is faster than in B-trees.
a) True
b) False
View Answer

Answer: a
Explanation: The sequential access in the hash tree is more efficient and faster than in B-tree. Because while constructing the hash tree in the expansions and contractions of the file is an estimated.
advertisement

To practice all areas of Data Structure, here is complete set of 1000+ Multiple Choice Questions and Answers. 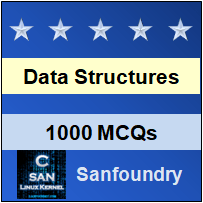