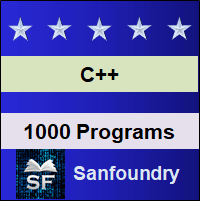 A tree is made up of nodes that are connected by either directed or undirected “edges”. The remaining nodes of the root node are known as child nodes or leaf nodes, and one of them is identified as the “Root node”. A tree is a nonlinear data structure that stores items in a hierarchy. Trees can be used to solve some of the most difficult problems in computer science. The advantage of trees is that they make efficient use of memory.

Here is the listing of C++ programming examples on Trees: