Answer: c
Explanation: Cipher is an algorithm for performing encryption or decryption. In cryptography, a set of defined steps are followed to generate ciphers. These are necessary to prevent a data breach.
advertisement

Answer: b
Explanation: Autokey cipher is a substitution cipher. It falls under the category of poly alphabetic cipher as it uses multiple substitutions at different positions in order to cipher the plain text.

Answer: c
Explanation: Encryption of plain text in Autokey cipher is done using the same table which is used for encryption in vigenere cipher. It is known as vigenere table.
Subscribe Now: Design and Analysis of Algorithms Newsletter | Important Subjects Newsletters

Answer: a
Explanation: Poly alphabetic cipher is a type of substitution cipher. It uses multiple substitution at different positions in order to cipher the plain text.

5. Which of the following is not a type of poly alphabetic cipher?
a) Autokey cipher
b) Hill cipher
c) One time pad cipher
d) Additive cipher
View Answer

Answer: a
Explanation: Autokey cipher like vigenere cipher uses vigenere table in order to encrypt the plain text. The difference in these cipher is the usage of the keyword.

7. Autokey cipher is harder to crack than keyword cipher.
a) true
b) false
View Answer

8. What will be the plain text corresponding to cipher text “ZEYQC” if autokey cipher is used with keyword as “SANFOUNDRY”?
a) INDIA
b) WORLD
c) HELLO
d) SECRET
View Answer

Answer: b
Explanation: Autoclave cipher is an alternative name given to autokey cipher. It is because the encrypted text is formed using a key that is generated from a message(plain text) itself.
advertisement

10. In which of the following cipher the plain text and the ciphered text does not have same number of letters?
a) affine cipher
b) autokey cipher
c) columnar cipher
d) additive cipher
View Answer

11. What will be the ciphered text if the string “SECRET” is given as input to the code of autokey cipher with keyword as “SANFOUNDRY”?
a) KEPWSN
b) EKWPSN
c) EKWPSNFDED
d) KEPWSNFDED
View Answer

Answer: a
Explanation: For encrypting a plain text in autokey cipher we first add the keyword at the beginning of the plain text in order to obtain the key for encryption. Then we use the vigenere table for making respective substitutions.

12. Vigenere cipher is harder to crack than autokey cipher.
a) true
b) false
View Answer

To practice all areas of Data Structures & Algorithms, here is complete set of 1000+ Multiple Choice Questions and Answers. 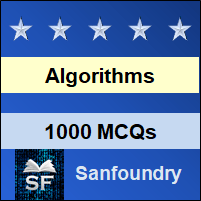