Answer: c
Explanation: There are 3 types of Stresses we consider in the geology of reservoirs. These are shear stress, compressional stress, and tensile stress. The stress which tries to pull the system and acts away from it is called Tensile stress and the stress which tries to compress the system and acts in opposite direction perpendicular to a plane under consideration is called a compressional stress and the stress which acts in opposite direction parallel to a particular plane is known as shear stress.

Answer: a
Explanation: The statement is true because joints influence the porosity and permeability which affect the fluid flow mechanism through the rock’s porous media.

4. What is the name of a joint with a large aperture?
a) Fissure
b) Fracture
c) Layer
d) Tunnel
View Answer

Answer: a
Explanation: The name of a joint with a large aperture is known as Fissure. Any separation in a geologic formation is called a fracture e.g. joint and fault.

5. Joints that run obliquely to the dip and strike directions of the country rock are known as which of the following?
a) Dip Joints
b) Oblique Joints
c) Bedding Joints
d) Strike Joints
View Answer

6. Which type of stress is this?

To practice all areas of Petroleum Production Operations, here is complete set of 1000+ Multiple Choice Questions and Answers. 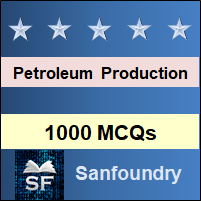