This set of Engineering Geology Interview Questions and Answers for freshers focuses on “Causes of Folding – 02”.

1. Which rock is lifted up during the folding due to intrusions?
a) Overlying metamorphic rocks
b) Overlying igneous rocks
c) Overlying sedimentary rocks
d) Overlying petroleum rocks
View Answer

Answer: c
Explanation: In magmatic intrusions, highly viscous magma may be forced up gradually and with considerable force so that sedimentary host rocks overlying are lifted up to provide the space for the rising magma.
advertisement

Answer: a
Explanation: Folding due to differential compression is totally dependent on the load from above and are attributed to superficial causes. These are, therefore, non-tectonic folds.

Answer: b
Explanation: If the strata in question is not homogenous, the bending may not be uniform in character and results in warping or folding of different types.

4. What is the reason for rock bursts?
a) Change in attitude of rocks
b) Shattering of rocks
c) Intense precipitation
d) Strained nature
View Answer

Answer: d
Explanation: All the stresses that have acted on the rocks during their folding are generally absorbed by these rocks by undergoing strain. Enough stored energy is released as soon as the excavations are made and this leads to rock bursts.

5. What is affected when the layers of undesirable nature are encountered?
a) Project cost
b) Time schedule
c) Safety of the project
d) All the three are affected
View Answer

Answer: d
Explanation: Same layers may be repeated along an alignment or one or more encountered layers are of undesirable nature, the project cost may be affected as also the time schedule and safety of the project.
Advertisement: Join Sanfoundry@Linkedin

6. Axial zones are the places of maximum concentration of stresses.
a) True
b) False
View Answer

Answer: a
Explanation: Folding is the response of the rocks to the stresses induced during the process. These stresses are often strong enough to break or shatter the rocks, especially in the axial zones, which are the places of maximum concentration of these forces.

Answer: d
Explanation: Shattering effect is of utmost importance because shattered rocks become: weak in strength parameters of all types; porous and pervious in character.

8. The axial regions have to be avoided and there is no alternative method to utilize the place.
a) False
b) True
View Answer

Answer: a
Explanation: Axial regions should be thoroughly studied and avoided if possible. If it is not possible to avoid them, these areas must be subjected to suitable processes of rock treatment for developing in them desired qualities of strength and imperviousness.

Answer: c
Explanation: Intrusion of magma or even rock salt bodies from beneath has been found to be the cause of uparching of the overlying strata.
advertisement

10. What is the cause of downward bending?
a) Differential compression
b) Differential shearing
c) Intrusions
d) Flowage folding
View Answer

Answer: a
Explanation: Strata that are being compacted under load in a basin of sedimentation develop, with the passage of time, downward bending especially in the zones of maximum loading.

Answer: c
Explanation: Flowage folding is the principal process of folding in incompetent or weaker, plastic type of rocks such as clays, shales, gypsum and rock salt etc.

Answer: b
Explanation: In general, the primary lateral compressive force is believed to act at right angles to the trend of the folds.

To practice all areas of Engineering Geology for Interviews, here is complete set of 1000+ Multiple Choice Questions and Answers. 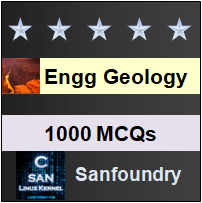