This set of Engineering Geology test focuses on “Classification of Faults – 04”.

1. The fault not belonging to the classification of fault with the attitude of fault as basis ___________
a) Heave fault
b) Strike fault
c) Dip fault
d) Oblique fault
View Answer

Answer: a
Explanation: The mutual relationship of attitude of fault and of the disrupted rock has also been used in some cases for classifying faults into three types: dip faults, strike faults and oblique faults.
advertisement

Answer: c
Explanation: Sometimes he faults are developed along the bedding planes; in such cases, they are aptly called bedding faults.

3. The fault where fault strike is parallel to the dip of the layers broken and disrupted by the fault?
a) Dip faults
b) Strike faults
c) Oblique faults
d) Hade faults
View Answer

Answer: c
Explanation: Oblique faults are sometimes called diagonal faults. In such a fault, the fault strike makes an oblique angle with the strike of the rocks in which it has caused the displacement.

5. The type of fault which is observed in both continental and oceanic environment is ___________
a) Strike-slip fault
b) Dip fault
c) Oblique fault
d) Wrench fault
View Answer

Answer: a
Explanation: Strike-slip faults are the most important and widely developed faults in the crust of the earth, which have been observed both on the continental and oceanic environments.
advertisement

6. Which is the type of strike-slip fault in which the fault plane has developed transverse to the regional structure?
a) Transform fault
b) Wrench fault
c) Translational fault
d) Tear fault
View Answer

Answer: b
Explanation: Wrench fault is a strike slip fault in origin in which the fault plane has developed transverse to the regional structure and even the net slip has taken place in the same manner.

Answer: c
Explanation: The dip of the wrench fault is very steep nearly vertical. These are also sometimes referred to as transverse faults.
advertisement

Answer: b
Explanation: Transform faults are strike-slip faults occurring in oceanic ridges on an extensive scale.

Answer: b
Explanation: Enechelon faults may be defined as a group of small sized faults that overlap each other in the region of their occurrence. A second fault appears on the surface at a distance before the first fault ends and so on.
advertisement

Answer: d
Explanation: A group faults that appear emerging outward from a common central region are classified as radial faults. The area is divided into blocks with inwardly tapering ends.

11. Parallel can sometimes lead to step faults.
a) True
b) False
View Answer

Answer: a
Explanation: In some cases, the intervening blocks are down thrown in the same general direction so that viewed from one side, the group gives a step-like appearance in the structure. These are then called step faults.

12. The type of fault not belonging to the classification based on the mode of occurrence is ___________
a) Parallel fault
b) Peripheral fault
c) Enechelon fault
d) Wrench fault
View Answer

Answer: d
Explanation: Wrench fault is classification with slip as basis whereas, parallel fault, peripheral fault, enechelon fault are based on the mode of occurrence.

To practice all areas of Engineering Geology for tests, here is complete set of 1000+ Multiple Choice Questions and Answers. 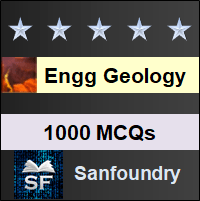