Answer: a
Explanation: The last electron enters in the outermost p-orbital in the p block elements, from group 13 to group 18 the entire elements belong to p-block, whereas group 13 is called a boron family. It includes the elements boron, aluminum, gallium, indium and thallium.

2. Which of the following group’s elements have smaller atomic radii?
a) Group 1 elements
b) Group 2 elements
c) Group 13 elements
d) All have the same atomic radii
View Answer

Answer: c
Explanation: Group 13 elements have smaller atomic radii and ionic radii than those of alkaline earth metals and alkali metals due to the greater effective nuclear charge, atomic radii increases on going down the group with an abnormality at gallium.

3. The atomic radius of gallium is greater than that of aluminum.
a) True
b) False
View Answer

Answer: d
Explanation: Low melting point of gallium is due to the fact that it consists of Ga2 molecules and gallium remains liquid up to 2276 k. Hence it is used in high-temperature thermometer. Gallium as a chemical symbol that is Ga and its atomic number is given as 31.

5. The ionization enthalpy _________ down the group in the family.
a) Increases
b) Decreases
c) Constant
d) Is a regular
View Answer

Answer: a
Explanation: Inert pair effect is the reluctance of the selections of the valence shell to take part in bonding, it occurs due to pore shielding of ns2 electrons by intervening d-electrons and f-electrons, down the group, it increases. The below elements of the group exhibit lower oxidation States.

7. Which of the following element exhibits + 3 Oxidation State only?
a) Gallium
b) Thallium
c) Indium
d) Aluminium
View Answer

Answer: b
Explanation: Reducing character of the boron family decreases down the group from aluminium to thallium because of the increase in electrode potential value for M3+/M, therefore, the correct order is given as aluminium > gallium > indium > thallium.

Answer: c
Explanation: The complex formation in the boron family is greater than the S block elements due to their smaller size and greater charge. So they can form complexes more likely than alkali metals and alkaline earth metals.

10. The compounds formed by the Boron family are __________
a) ionic
b) covalent
c) both ionic and covalent
d) neither ionic nor covalent
View Answer

Answer: b
Explanation: 4 moles of aluminium atom combines with 3 moles of carbon atom on heating, in order to form aluminium carbide. Aluminium carbide is ionic in nature and it also forms methane with water. Its chemical formula is given by AlC3.

12. When boron reacts with nitrogen which of the following compound is formed?
a) Boron oxide
b) Boron nitrate
c) Boron hydrides
d) Boron nitride
View Answer

Answer: d
Explanation: On heating, two moles of boron atom combine with one mole of a nitrogen molecule in order to form 2 moles of boron nitride. Aluminium also when reacted with nitrogen forms aluminium nitride in the same way.

14. The metallic character of __________ is less than that of alkaline earth metals.
a) Boron family
b) Alkali metals
c) Magnesium
d) Hydrogen
View Answer

Answer: a
Explanation: The elements of the Boron family are less electropositive than the alkaline earth metals due to their smaller size and higher ionization enthalpies. On moving down the group, the electropositive character first increases from Boron to aluminium and then decreases from gallium so thallium due to the presence of d and f orbitals which causes poor shielding. 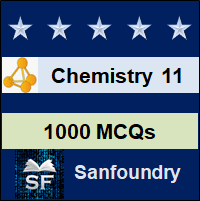