This set of Refrigeration Quiz focuses on “Theoretical VCR with Dry Saturated Vapour after Compression – 2”.

Answer: b
Explanation: During evaporation, the refrigerant absorbs its latent heat of vaporization from the medium or system which is to be cooled. So, the heat absorbed by the refrigerant is known as Refrigerating effect carried out in the vaporizing process. 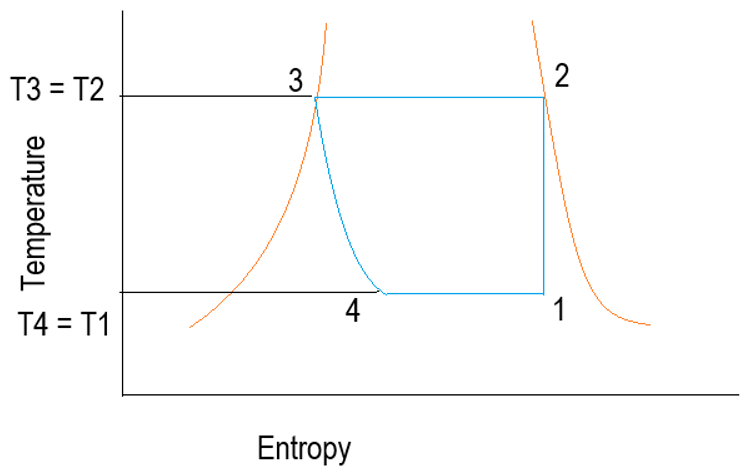 Answer: a
Explanation: As in the process 2-3, the temperature is constant by decreasing the change in entropy. As entropy change is related to heat transfer the second law of thermodynamics. Change in entropy is reduced. Hence, heat is rejected. So, it is a condensation process.
Subscribe Now: Refrigeration and Air Conditioning Newsletter | Important Subjects Newsletters

Answer: d
Explanation: As in the process 3-4, the temperature is decreased and also decrease in an optimal change in entropy. As pressure is reduced as well as optimal heat transfer is carried out to get the desired phase. These both processes are observed in Expansion, not only decreasing pressure is essential but also stabilizing the randomness of particles.

Answer: b
Explanation: As in the process 4-1, the temperature is constant by increasing the change in entropy. As entropy change is related to heat transfer the second law of thermodynamics. Change in entropy is increased by increasing the randomness done by phase change. Hence, heat is absorbed. So, it is an evaporation process.
Check this: Mechanical Engineering Books | Refrigeration & Air Conditioning Books

6. What does point 2 say about the state of refrigerant?

Answer: b
Explanation: Point 2 lies on the saturated vapor line. Hence, it is a dry saturated vapor containing no liquid particles. If the point is inside the curve, then it is wet vapor. If it is outside the line, it is superheated vapor. It cannot be liquid after compression. 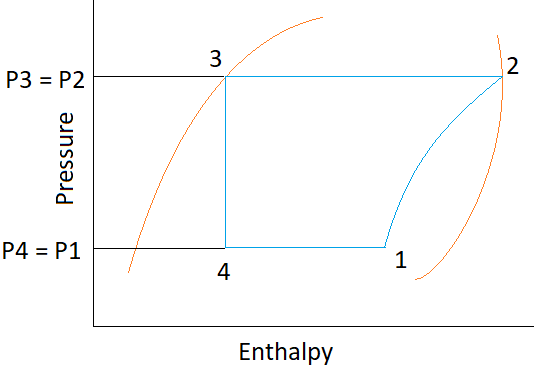 Answer: d
Explanation: In a throttling process, no heat is absorbed or rejected by the liquid refrigerant. It is also called as an isenthalpic process, in which change in internal energy and flow work remains the same. Enthalpies remain same, so H1 = H2 represents throttling.
T1 = T2 is the isothermal process.
S1 = S2 is an isentropic process.
P1 = P2 is an isobaric process.
advertisement

To practice all areas of Refrigeration for Quizzes, here is complete set of 1000+ Multiple Choice Questions and Answers. 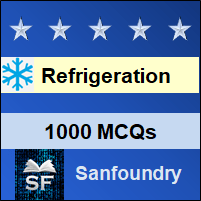