Answer: c
Explanation: In the process of carbonisation, the bituminous coal is slowly heated to remove moisture and occluded gases. Then at 270oC H2S and olefin gases are evolved. At about 450oC the liberated gases consist of hydrocarbons and at 700oC hydrogen gas is liberated.

Answer: b
Explanation: If the coal is free to expand at plastic stage, it produces a highly swollen open texture coke produced from strongly coking coal. If this expansion is suppressed by the retaining wall, a dense coke having fine pore structure is produced.

3. Coal is a good conductor of heat and electricity.
a) True
b) False
View Answer

Answer: b
Explanation: Coal contains maximum carbon inside it which is not a good conductor of electricity (except graphite). Coal produces a large amount of heat on its combustion but is not a conductor of heat.
Subscribe Now: Engineering Chemistry II Newsletter | Important Subjects Newsletters

Answer: d
Explanation: The plastic zone so formed by the caking coal results in a considerable temperature gradient. There may be a drop of about 250 oC across half an inch thickness.

Answer: a
Explanation: Caking coal form a plastic zone which acts as a heat barrier. Non-caking coal does not forms this plastic material due to which it has high rates of carbonisation. Coking coals are formed by caking coals.
Become Top Ranker in Engineering Chemistry II Now!

Answer: c
Explanation: Coke-ovens are used for the completion of process of carbonisation. The final product obtained by carbonisation is coke. Destructive distillation plants are used to generate charcoals.

8. What is done when the coke is too friable for use in carbonisation process?
a) It is divided into small pieces
b) Its maturity is made decreased
c) The ash content is reduced
d) It is pulverised
View Answer

Answer: d
Explanation: By pulverising the coal, the rate of combustion of coal can be easily controlled which helps in the easy formation of coke. Coal can also be briquetted for using under friable condition.

Answer: a
Explanation: The coke produced by this method is used as a domestic fuel. The coke formed contains 5 to 15 % of volatile matter and is not sufficiently strong for metallurgical processes.
advertisement

To practice all objective questions on Engineering Chemistry, here is complete set of 1000+ Multiple Choice Questions and Answers. 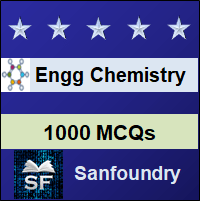