4. Which of the following is not considered while deciding the optimum firing order of the engine?
a) Engine vibration
b) Engine cooling
c) Development of the backpressure
d) Engine configuration
View Answer

5. Why is the Dwell meter used?
a) To set the spark plug gap
b) To set the ignition advance
c) To set the contact breaker gap
d) To set ignition timing
View Answer

Answer: a
Explanation: During starting, the quality of the spark is poor due to low speed. Magneto ignition system is mainly used in racing cars and two-wheelers. The main advantage is that it does not require a battery.

7. For how many times the contact breaker must make and break the circuit for a four-cylinder engine operating at N rpm?
a) N times
b) 1.5N times
c) N/2 times
d) 2N times
View Answer

Answer: d
Explanation: The cam is having the same number of lobes as there are engine cylinders. They are used with two contact breakers in parallel.
advertisement

Answer: b
Explanation: The retarded timing reduces fuel economy. Due to spark retardation, the fuel burns slowly and after some time than it should be burned.

Answer: a
Explanation: The vacuum advance mechanism shifts the ignition point under part-load operation. The adjustment system is designed so that its operation results in the part-load advance curve.
advertisement

10. The optimum spark timing must be retarded for the engine operating with a rich mixture.
a) True
b) False
View Answer

Answer: b
Explanation: The optimum spark timing must be advanced for the engine operating with a rich mixture. The larger throttle opening size means better mixing and combustion.

To practice all areas of Automobile Engineering, here is complete set of 1000+ Multiple Choice Questions and Answers. 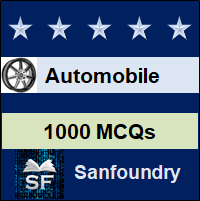