2. Which of the following has the same combustion as HCCI (Homogeneous Charge Compression Ignition) engine?
a) SI engine
b) CI engine
c) Hybrid of both SI and CI engine
d) Wankel engine
View Answer

Answer: c
Explanation: HCCI engine has the same combustion as a hybrid of both SI and CI engine. HCCI is a form of IC engine in which well-mixed fuel and air are compressed to the auto-ignition temperature of the fuel.

3. Which of the following is true for the HCCI engine?
a) Emits high NOx and soot
b) Have a large power range
c) Efficiency is comparatively less
d) Pre-catalyst hydrocarbon emissions are higher
View Answer

Answer: b
Explanation: SI engines are more ideal for the lean-burn concept. A lean-burn mode is a way to reduce throttling losses. In SI engine, the power is reduced by partially closing a throttle.

5. By which technique can the charge stratification be achieved?
a) Injection
b) Carburetion
c) Lean burn technology
d) Injection as well as carburation
View Answer

7. What is true about the Wankel engine?
a) It is a rotary external combustion engine
b) It is more expensive
c) It has a longer operating cycle
d) It has less time to complete the combustion
View Answer

Answer: c
Explanation: Wankel engine is a type of internal combustion engine using rotary design to convert pressure into a rotating motion. It does not make use of reciprocating pistons.

Answer: a
Explanation: Variable compression is used in SI engines. There are several methods for changing both the geometric and effective compression ratio.

9. Which of the following is true for stratified charge engine?
a) More prone for knock
b) It uses an overall rich mixture
c) It has a lot of throttling losses
d) It has multi-fuel capabilities
View Answer

Answer: d
Explanation: The Stirling engine has high efficiency. A Stirling engine is a heat engine operating on cyclic compression and expansion of air or any other fluid.

To practice all areas of Automobile Engineering, here is complete set of 1000+ Multiple Choice Questions and Answers. 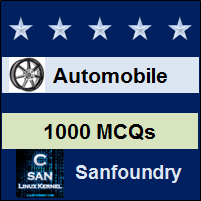