2. In Thiele Geddes method, which of the following are calculated?
a) Vapor and liquid compositions
b) Input and output fees rates
c) Reflux ratio
d) Boil up
View Answer

Answer: a
Explanation: Vapor and liquid compositions are calculated In Thiele Geddes method, while reflux ratio in McCabe Thiele method.

Answer: a
Explanation: Lewis Matheson is the inverse of Thiele Geddes method, while other listed methods are completely different from each other and all are used to calculate number of trays.

4. Lewis Matheson method can be adjusted, for fixed number of
a) Trays
b) Stages
c) Columns
d) Sections
View Answer

Answer: b
Explanation: Lewis Matheson method can be adjusted for fixed number of Stages instead of reflux ratio fixed.
advertisement

6. The value of K is independent of
a) Composition
b) Feed ratio
c) Volatility
d) Reflux
View Answer

Answer: a
Explanation: As per the relation the value of K is given as the function of KV = f (pure liquid)/f (pure vapor).

Answer: b
Explanation: For accurate Reflux estimate, narrow boiling is necessary, where separation is required the reflux of high priority is used.

Answer: c
Explanation: Azeotropic composition is y*=x, whereas the x+y* = 1 gives the actual mole balance of gas and liquid at equilibrium. 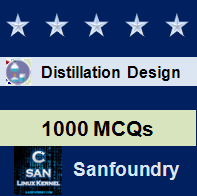