1. State true or false.
It is preferable to use a number of CSTRs in series to achieve a specific conversion than a single CSTR.
a) True
b) False
View Answer

Answer: a
Explanation: Total volume required to achieve a given conversion is less than the volume of a single CSTR. A number of CSTRs in series approaches Plug Flow behavior.

5. The plot of rate of the reaction and the reactant concentration for unequal sized CSTRs in series is ____
a) 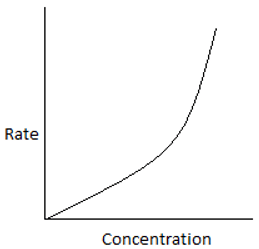 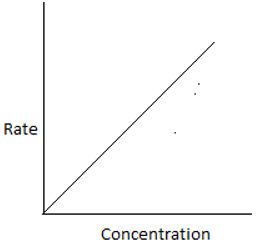 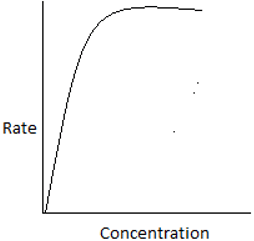 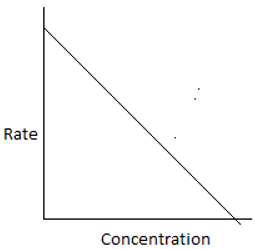 Answer: a
Explanation:For ith reactor, \(\frac{-1}{-τ_i} = \frac{-r_i}{C_i-C_{i-1}}.\) For the 1st reactor in series, the rate is high and decreases for every consecutive reactor. Hence, the plot shows a high rate for the initial concentration.

Answer: a
Explanation: Damkohler number estimates the conversion that can be achieved in a flow reactor. At low conversions nearly 10%, Da≤0.1

8. State true or false.
For different sized CSTRs in series, the best system is the one having a minimum volume for a specific conversion.
a) True
b) False
View Answer

Answer: a
Explanation: The optimum size ratio of CSTRs in series depends on the reaction kinetics. For a first order reaction, equal sized CSTRs are operated. For positive order reactions, smaller CSTR is followed by larger ones.

10. If Da is the Damkohler number, for equal sized CSTRs in series carrying out first order reaction, the plot representing conversion and number of CSTRs is ____
a) 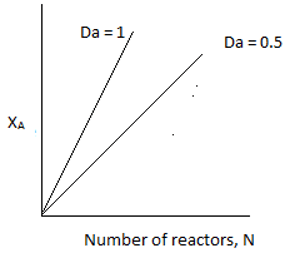 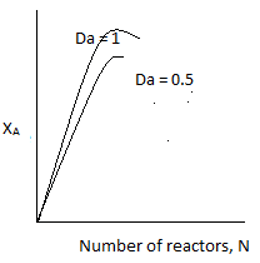 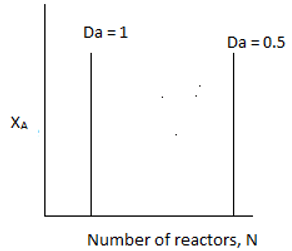 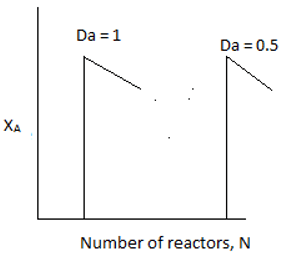