Answer: c
Explanation: The final concentration for both the cases is same and can be calculated using the formula
CA2 = \(\frac{CA0}{(τ1K+1)(τ2k+1)} \)
Hence, it can be inferred that for first order reactions, irrespective of the arrangements the final conversions are going to be the same.

2. For all positive reaction orders and any particular duty the MFR is always larger than the PFR.
a) True
b) False
View Answer

Answer: a
Explanation: Comparison of performance of single MFR and PFR are made for the nth order and was inferred that the MFR is always larger than a PFR for a given duty.

Answer: c
Explanation: The final concentration for both the cases is same and can be calculated using the formula
CA2 = \(\frac{CA0 e^{-kτp}}{(τmk+1)} \)
Therefore, any arrangement does not make any difference for first order reactions.

Answer: d
Explanation: A graphical procedure was presented by Jones in 1951 to estimate the outlet composition of MFR’s in series.

Answer: b
Explanation: For this kind of rate-concentration curve, the concentration should be kept as high as possible, therefore this arrangement should be used.

6. Determine the space time of a PFR for the given reaction-concentration curve where the concentration is to be reduced from 1.6 to 0.4 mol/lit in minutes. 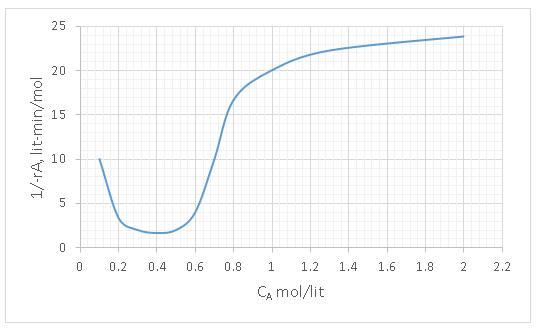 7. Find the size of the MFR in litres required to achieve 40% conversion for a flowrate of 100 lit/min. 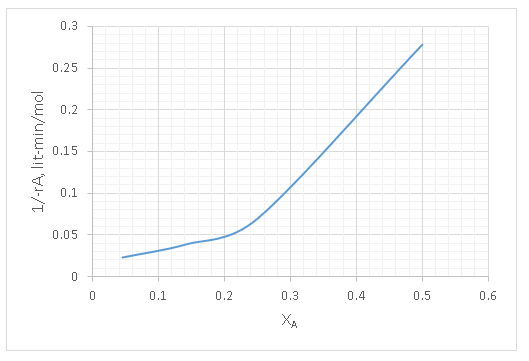 Answer: d
Explanation: The basic design equation for a MFR is
\(\frac{τ}{CA0} = \frac{XA}{-rA} \)
A rectangle is to be drawn as shown in the fig below. And the area of the rectangle gives the space time. 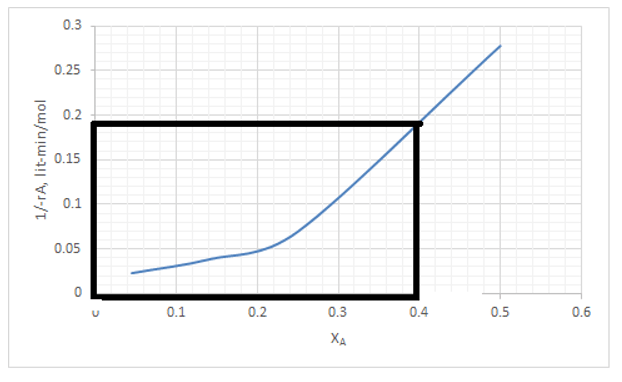 9. Effect of flow type on reactor performance when the conversion is small.
a) no effect
b) cannot be determined
c) very small
d) very large
View Answer 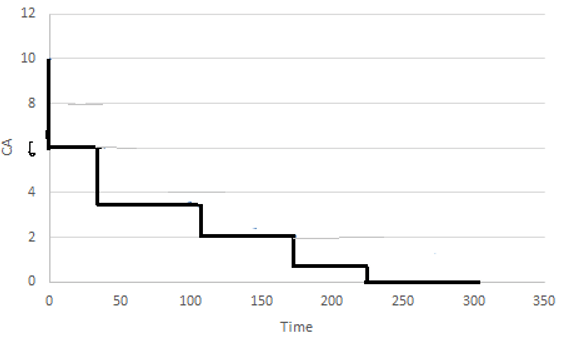 Answer: a
Explanation: The concentration profile is for MFR’s in series. The entire series can be replaced by a PFR whose volume is smaller than the total volume of the MFR’s.

To practice MCQs on all areas of Chemical Reaction Engineering, here is complete set of 1000+ Multiple Choice Questions and Answers.